Plan the time to have a meeting or event by co-ordinating availability with all the participants using this fuss-free online tool. 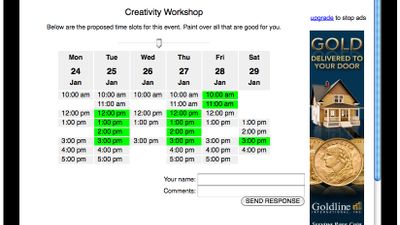 Our users have written 2 comments and reviews about WhenIsGood, and it has gotten 12 likes

WhenIsGood was added to AlternativeTo by mfw on and this page was last updated . WhenIsGood is sometimes referred to as When Is Good.

The interface is really more accurate and therefore it's take the half of the time than the doodle service to creat a event ! create ! Just missing a email notification (when someone have reply to a event) and it will be the perfect planning service !

I like WhenIsGood over the other systems because it functions more based on time range. Within a specified range, everyone can mark when they are free instead of voting just for suggested options. This makes it easier to get data from everyone and make sense of what to do.

I'm actually using it not just for getting everyone together but for working out schedules with lots of separate people in order to find the best times for each separate appointment. Most tools like that, such as YouCanBook.Me (from the same company as WhenIsGood) are more of a set-in-stone first-come-first-serve setup, which is good for some things but not for me.

WhenIsGood makes it easy to collect information and then figure out how to best use it yourself.

Excellent review, you hit every point I would've written. Including how YouCanBook.Me doesn't fit this specific need we have :)

None of the alternatives I looked at today (10 of them) had the very simple but powerful feature of drag-across-times that WhenIsGood has.

Admittedly I am left wanting a prettier interface for WhenIsGood, but that's totally acceptable given how much more functional it is for gathering as many time slots as I need to.

Thanks, Casey. I do want to update my thoughts: Whenisgood is such a simple system and it needs improvement. The developers are obviously just milking it to push their main project YouCanBook.Me and it is obnoxious that they get ad-revenue or get people to pay to turn off adds and to access other features. The concept is so simple.

What we need is an Open Source version of this. If it were Open Source, people would have already fixed the oddness in the interface and it would be a much more valuable and flexible tool for everyone. I contacted the developers and they sort of said maybe one day they'd Open it, but the fact that it isn't already means they prioritize $ above quality, which is understandable, but, in my opinion, not honorable.

I am wanting to use only Free/Libre Open Source Software whenever possible. We need someone to build an Open Source version of this.

Said about WhenIsGood as an alternative

They are the most similar but WhenIsGood has a bit more options.