webpack is a module bundler for modern JavaScript applications. When webpack processes your application, it recursively builds a dependency graph that includes every module your application needs, then packages all of those modules into a small number of bundles - often only one - to be loaded by the browser. 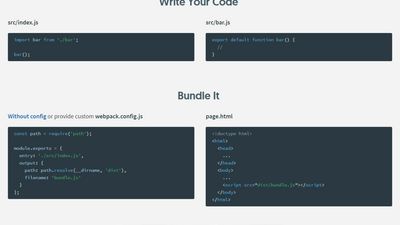 Our users have written 1 comments and reviews about Webpack, and it has gotten 18 likes

Webpack was added to AlternativeTo by Thelle on and this page was last updated .

After a month of converting an existing project from Gulp to Webpack 3. I am quite tired of fighting my front end tools. If you are having major issues with Webpack. You are not alone!!!

Let me explain. First off, the documentation even in the current version 3 is still seriously lacking. On most plug-ins it seems as though the description tells you what it does. However, by the time you figure out all the nuance and issues that arise from a large code base you will have lost/grayed a few hairs especially if you have any deadlines. When you need to do something that isn't covered in one of the few constrained tutorials out there. It is hard to determine what best practices are even with the help of Stack Overflow.

Even when you really want to analyze and really dig in to figure out why a particular plug-in is doing something or why it is going haywire. Webpack complicates things so much that even though node debugging tools with Chrome work great and allow you to debug into Webpack to troubleshoot issues. It is still a quite a joke to do it and it is not a funny one.

I am seriously irritated by Microsoft Visual Studio 2017's Tooling Team for deciding to include Webpack configured by developers in their default React and Angular templates and that it was pushed into the Angular CLI (@angular/cli) which does the Ahead-of-Time compilation to output a Webpack build. From what I can determine it appears as though Sean Larkin maybe responsible for this move. Don't know for sure.

Though I have been able to get code running with the help of Gulp tasks and the Angular CLI. I can't tell you how much time was lost on this product known as Webpack.

(sarcasm) Maybe it should say on the top of the Webpack documentation. These stunts are performed by highly trained professionals. Attempting to reproduce these stunts yourself will hamstring your teams development efforts and may get you fired!

Back to tried and true Gulp tasks and running the Angular CLI which uses the configurations in (./node_modules/@angular/cli/models/webpack-configs) until the project reaches maintenance mode. Who knows maybe it will improve over time and I will let one of the guys play around with it in the future. However, for now using Webpack configured by developers is out.

Now, while I thank the Webpack team for their altruistic donation of effort. I have found it to be more like pathological altruism! That is where you harm those you are trying to help. Though it may improve in the future. For now, it is sad that a one star is the lowest rating!

So AlternativeTo please do not let them convince you to remove this review again. Simply to protect the "feelz" and jobs of the developers creating this mess.

People need to read this!!! I checked this time and seen an alert that it was removed.

PLEASE DO NOT REMOVE THIS REVIEW AGAIN!

I have this review saved off and I have set reminders to check for it and I can post it under hundreds of different logins if necessary.

I promise my altruistic energy to put this information out to dev teams to save them money and time is much more than your ability to protect the product creators "feelz".

Thank you for your time!!!