A free and lightweight outliner, only 465KB in size. It allows you to store all your notes, emails, texts, hyperlinks, etc. into one or multiple plain-text databases. With the look and feel of the familiar Windows Explorer, editing, storing, browsing, searching, and retrieving your data cannot be any easier! TreePad can be run directly from a floppy or USB stick, so its portable. To find any article you previously created or imported, you can browse the tree, in the same way as you would browse folders in Windows Explorer.

The treepad website is no longer available. You can still find the program at https://web.archive.org/web/20190720190155/http://www.treepad.com/treepadfreeware/ 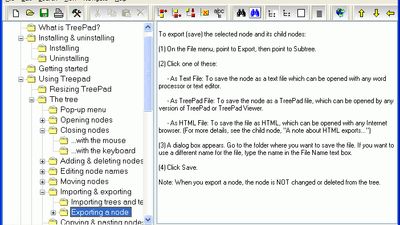 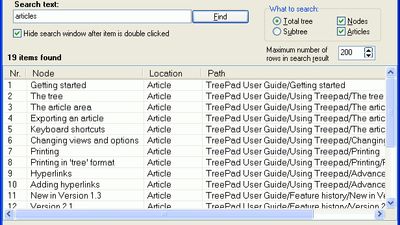 Our users have written 14 comments and reviews about TreePad, and it has gotten 30 likes

TreePad was added to AlternativeTo by Pangolin on and this page was last updated .

Started using Free Lite on Win-7 PRO x64, 24 hrs ago. All I want are text notes
So simple and a v.small footprint, portable setup is 1.1 MB ... not eleven, that is one-point-one MBs
Its nearest look-a-like TreeLine is 34MB footprint installed ... thirty four MBs :gasp:

With node/folders disabled (in Options) child nodes/articles are easilly identified in the tree pane.
The default classical windows yellow folders on all nodes was a bit ovewhelming.
I like the simple (Win Registry) style

Tree pane on the left and Articles (notes) pane on the right.
The tree does not migrate into the right/articles pane as it does in some other note-takers/PMIs
Both panes can be optioned for font type/size/color and backcolor

Built in hot-keys are almost familiar, although it would be good if they could be customized.
Themes ? Skins (View -> Skins) are very weak ...
By back coloring both panes, PL is less likely to be lost in a sea of windows

CONS: Toolbars cannot be modified, other than hidden.
AutoSort toolbars does not work (BUG).
**Toolbars can be reordered by hiding all and enabling them in turn to suit your needs. **

Articles (RHand) pane has some irritations ...

Free Lite could do with an update, last was in Mar-2010
Commercial editions starting with TreePad PLUS are suited to Win-10 (and Linux/Wine)
Products list shows choice of downloads for Windows and Linux

I have searched a lot, but did not find an app better than TreePad Business or TreePad X Enterprise for Note Taking and Notes Management.

NO LONGER AVAILABLE FROM ANY WHERE <<

Developer (FreeByte.com) have disappeared from the web, along with their programs.
Treepad Lite (free) has served me well over the last 2 years, using it all day every day. Win-7 PRO x64

Now looking at MemPad because it is still actively developed (and IMO) a stepup from TreePad Lite..

It's more then a year since the last comments about Treepad from the website Freebyte.com. The website with all the programs is down, because the owner died. The owner was my brother, and I want to let people know what happend. Maybe I can help if someone wants one of his programs. Just let me know, and maybe I can do something. Maybe no one is reading my message because it's more then a year ago, but it felt like I had to do this.

Thank you Elisa for this information, sincere condolences to you and your family.

I am a long time TreePad user and have been wondering a long time what happened to FreeByte software. I still use TreePad daily (have been doing so over a decade) and think it is quite extraordinary how well it still works. I have not been able to find alternative for it, such a great software it is. One obstacle here is of course the export-import issues as I have quite big archives that I do not want to lose.

I would buy an upgrade license to the TreePad Enterprise X 384GB version immediately it it was somehow possible, even though I understand there has not been nor will be any updates.

Thank you Elisa for letting us know.
My thoughts are with you and your families.
If you are able to arrange anything please let us know in this "Comments" page or there is a link to this website's principals at the foot of this page.
bawldiggle
17-Jan-2021

Elisa, I just sent you a private message, because I couldn't figure out how to reply here (until just now).

Thank for letting us know what happened. Many of us were wondering.

Although there are many alternative pims out there, including some extraordinary open source versions, I haven't found anything with the feel & comfort that matches what your brother created.

He left behind quite a legacy.

Henk Hagedoorn didn't actually invent the tree-view control—but as far as I know, TreePad (and its subsequent versions) was one of the very the first popular Windows PIMs to use it. Henk was a great guy, too. I corresponded with him a bit—and, being a technical writer, helped him with his early English documentation. My wife and I ended up visiting him in the Netherlands, and he took us around the town showing us various things. I was very sad to hear he'd passed away. But he had a very positive influence on many computer users, helping them manage an unimaginably massive amount of personal data. A free version of TreePad was always available for anyone who wanted it; he charged only for the versions that added extra features. He was one of the first software developers to have that policy, too. Bedankt, Henk! :?)

Do you happen to know the date of his passing? I tried in vain to locate an obituary for him, in the UK. He had such a profound influence on my productivity, I'd like to write up a dedication for Henk.

So sorry to hear about your loss, Elisa. How sad. I bought the Enterprise version long ago, but I changed my computer since then, and now I am unable to find the program. You brother's work is so remarkable. I've used it for years. Thank you. If the program is still aviable, I'd like to buy it again. Ciao from Italy.

Do you still have the license info? You can get a trial copy off the web, and copy and paste the registration info.

One place you can get a trial copy, is from Treepad's web archive.

I have been using TreePad Business Edition for more than a decade and, as noted by others, I have not yet found anything that comes close. My sincere condolences, @elisa555, to you and your family, and thanks for the info. I am a software engineer, and am prepared to put some time into maintaining and/or supporting TreePad, if this can be of help. There are a few enhancements that I would like to see, e.g. mergingof Business Edition databases. I guess that bidirectional import/export features would be ideal - be it RTF, XML, HTML, JSON etc. It may even be a consideration for your family to place the TreePad source code into the public domain under, at least, a BSD or an Apache type license - this way the tool will live on and your brother's legacy preserved for many years to come. Just a thought.

Thanks again and kind regards Jonathan

Although it doesn't have import capabilities, there was a tool that the Process Text group used to sell, called Amber Treepad Converter. Unfortunately, they only specialize in Email conversions nowadays.

It had a host of export formats, separate from the formats that Treepad provided. It used the .tpd format as the source.

So for example, you could export to PDF, Word, DBF, Excel, MS Access, opml, and some other legacy formats.

Yes, the source for some of the Treepad versions would be nice. Or at least an option to purchase more licenses, with separate registration keys.

In fact, even if this is the end of any further licenses or development, I'd be honored to donate to Elisa from time to time, in gratitude for the conveniences that Henk developed for all of us.

I am extensively using TreePad Enterprise as a Knowledge Base for our production plant.

The ability to export the database to html web based format was extremely powerful in sharing this information.

It was extremely robust, never locking up and flawlessly performing as intended.

I don’t think it’s ability to export all documents as a dynamic tree navigation is available with any other software.