What is The Wub Machine?

Remix your music into anything! Make Dubstep, Drum & Bass, Electro House and more with the Wub Machine.
- Turn your best music into Dubstep, Drum & Bass, Electro House or more popular genres.
- Add Cowbell, Kick Drum or other effects to any song in your music library.
- Share your creations via Email or SoundCloud!
- Watch the beat drop with the live EQ view!
Show full description ▾

The only problem with Wubmachine are the lack of options. There are only about 4 to 8 depending on which version, and only half of those are ones that you'd actually want to use. So it's fun at first, then just gets repetitive. The app has potential to be a lot better, imo they should at least either have more than 1 version of each choice (Dubstep 1 and Dubstep 2, etc.) or let you tweak the pitch or speed or anything just to change it up a little bit so it all doesn't sound the same.

There's a site called Nightcoremaker.com that's similar. Upload an mp3 and it makes a "Nightcore" version of it. There's only option here, but it can be funny. 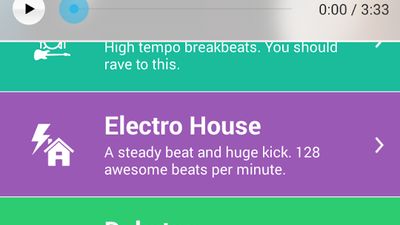 Our users have written 2 comments and reviews about The Wub Machine, and it has gotten 2 likes

View all
The Wub Machine was added to AlternativeTo by Danilo_Venom on Jul 16, 2017 and this page was last updated Dec 2, 2019.