What is SWiSH Max?

SWiSH Max is a Flash creation tool that is commonly used to create interactive and cross-platform movies, animations, and presentations. SWiSH Max is generally considered to be a simpler and less costly Flash creation tool in comparison with Adobe Flash. SWiSH Max does not support some Adobe Flash features such as ActionScript 3.0, shape tweens, and bitmap drawing capabilities. It does, however, include general Flash creation features such as vector drawing, motion tweens, and symbol editing. In addition, SWiSH Max incorporates a number of automated effects and transitions, which make building certain Flash elements such as buttons, advanced transition effects, and interactive Flash sites simpler. One drawback of SWiSH Max is its inability to open or save .fla files, which limits exchanges between other programs to final .swf files. 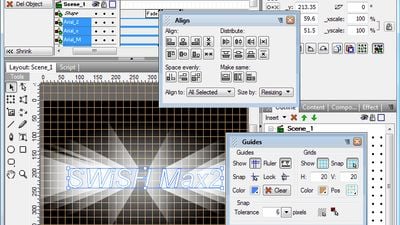 Our users have written 1 comments and reviews about SWiSH Max, and it has gotten 5 likes

SWiSH Max was added to AlternativeTo by gyorgyjano on and this page was last updated .

Not very expensive, efficient, full of special effects Be programmed easily A good alternative to Flash for programming small animations and/or websites