Slido’s focus is on simplicity, allowing organisers to create an event in less than a minute, while participants can join from any device with just one simple code.

Since its foundation in 2012, Slido has helped to transform over 320,000 events across more than 100 countries by engaging millions of participants. Slido has been adopted by a number of renowned conferences, including SXSW, Web Summit and Money20/20 and has worked with high-profile clients including Spotify, Lufthansa, BBC and Oracle.

Headquartered in Bratislava, Slovakia, Slido has a team of more than 120 people, with offices in London, New York, San Francisco and Sydney.

One time purchase ranging between $199 and $999, and / or subscription that costs between $55 and $165. Price may vary depending on commitment and so on. 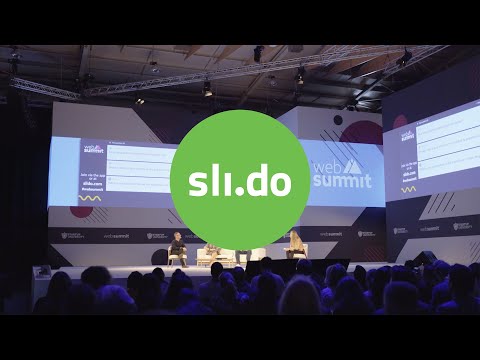 Make this page better by adding screenshots to Slido.

Slido was added by jurajholub in Apr 2015 and the latest update was made in Oct 2019. There is a history of all activities on Slido in our Activity Log. It's possible to update the information on Slido or report it as discontinued, duplicated or spam.

Review 7/5/18 I used this software at an event I attended. It actually works very nicely - users go on a webpage and use a login code similar to https://alternativeto.net/software/logmein-express/...

I used this software at an event I attended. It actually works very nicely - users go on a webpage and use a login code similar to

Your phone basically acts like a remote control.. sort of but it just sends data to the server via your internet connection. You can do things like polling or ask questions. The time it takes to transit information this way is only a few seconds so its extremely fast and responsive for polling

Sli.do is excellent. V intuitive to use, both to create content initially and to use the quizzes / word clouds for the user. At a moment where we are scrambling to upgrade how we are using online to make sure it feels interactive, it couldn't be a more useful tool. We used it in a large group of 100+ mixed ages and also twice with 10-20 teenagers - they loved it. Good fun

I had to do a virtual presentation and wanted audience participation. I used Slido to do polls with the audience. It was super easy to use and gave me options for different polls. As the participants typed their responses, they appeared in live time. All participants stated that the polls were easy to access. I used Google Slides and I was able to embed Slido seamlessly!

Really great tool for audience engagement. The usual stuff: q and a, quiz etc., but in a great, intuitive way and with continuous improvements and loads of customization tools at a fair price. The recently launched clicker add-on allows you to present and use slido on a single screen, perfect when you are using a single computer and do not have a switcher. I have used slido for events a few times, the support was always there when needed. Overall my first choice for audience engagement as an event planner.

I was super happy with Slido. I tried the free version for our event and the experience was very smooth, the UX was very intuitive. It works really well both on my WIndows laptop and iOS phone. In addition there were short video tutorials which made it even easier to set up the event. And the highlight for me was amazing customer care afterwards - actually a real person contacted me for feedback and answered my questions promptly in a super nice way. I still cannot believe that even for non-paying users Slido takes so much effort with their customer care. Thanks a lot, I will definitely use it again!

It's a really interesting tool that can integrate people wherever they are, whatever argumentos, in a friendly way.
Very good! Excellent

I have been using Slido religiously at various videogames industry conferences around the world for the last 3 years mainly as a moderator on panels and let the audience decide what topic I should prioritise for the panelists. I have also used it now for a fire-side chat with me where the audience interview me via slido.

Given the modern audience are easily distracted with a phone in hand, slido gives that perfect reason to use the phone to interact with the speaker and give their full attention. Amazing product team slido!

Slido is brilliant! If you are sick to death of dire presentation Q&A sessions, use slido. Everyone gets to participate and all questions can be saved, sorted and analysed. it is dead easy to use, even for relative techno illiterates! Conference delegates love it - they can see their questions on display and have them addressed. Sleeping, bored conference delegates are a thing of the past with this great technology.

Great way to motivate our audience to ask questions, since they can do this anonymously. It's a national specificity in my country, that people don't always want ot DARE to ask questions; but if they can do it without entering their names, it gives them the will to ask. The interface is nice and customizable, so I am very satisfied with this service.

We used Slido to run a live poll during a conference. Easy to use. No barriers to entry. Highly recommend. We will use Slido again at our next event.

Great tool to get live-feedback from your audience! Easy to use, simple to work with. Go for that tool!

I have used dozens of tools in my presentation career; however, I have never used one more intuitive and incredibly easy for my participants as Slido is.

Well done from the onboarding experience to the presentation day.

The best polling tool for events! I've used Slido as a host myself and it has been always so great experience, both for me and the audience. Really helps to make long keynotes more interactive and engaging.

Extremely useful and potent for any kind of public / audience interaction. I love the real time charts and tag clouds. Really cool. What's not so cool is the iOS app if you want to remote control sli.do. Admin view is kinda strange to access and handle.