Skedpal hopes to help decide WHEN you should perform a task. Its A-I seeks to integrate CALENDAR and TO-DO LIST by appointing tasks to their best time slots, based on its predicted duration, your priorities, your available free times, your regular patterns, etc., thereby (supposedly) aiding your productivity, preventing lost time, squeezing minor but necessary tasks into the myriad available small unnoticed slots, and grouping similar tasks into "batches." Great idea -- something that knows how to assign WHEN to do a task, then puts it on your fully synchronizable compatible calendar.

But. It's not ready for prime-time. AT ALL.

Tons of problems. Their Android app isn't even linked on their downloads web-page (it exists; they just FORGOT TO LINK it!); their cloud-service isn't capable of operating via a web interface (hunh? store your data on internet, but can't access your data via commonplace internet?); their (required) desktop app fails to un-install properly, leaving behind registry keys replete with your private data; in fact, there is no privacy or encryption in place at all, as far as I can tell, so they're naively sharing your entire task-list and calendar with hack0rz-world-at-large; it fails to display properly on at least two varieties of phone (I-Phone, Android) because it truncates words or overlapps them such that link functionality is compromised (click on the wrong one, can't tell which one you click, can't click the one you want because it's partially covered by one you don't want, etc.); it won't export tasks or calendar to any useful file-format (searching the ENTIRE help database for the term "export" yields LITERALLY ZERO RESULTS). These are probably interface (not functionality) problems, but at $10 a month (or more!) and as late as version 2.something.something they should have long ago stopped being problems at all. Furthermore, a glance under the hood indicates the programming relies heavily on Java and on Stack-Overload catch-out back-looping, both of which indicate to me that the program isn't through-composed or thought out from the beginning, but rather will be a continually accreting work-in-progress with little architectural forethought. Expect plenty of gee-whizzes but very little reliability. Get cash and run.

My recommendation? The visionary team behind this wonderful idea should promptly go talk to the angel venture-capital investors and tell them, that the sucky dreadful inept incompetent programmers whom the investors have nepotistically (I assume) required, must be fired immediately, because the failed programming is ruining an otherwise excellent concept. GET A REAL PROGRAMMING TEAM. AND DON'T GO PUBLIC UNTIL YOUR PRODUCT IS READY FOR ALL PLATFORMS. Or at least, at this price, they could at least hire a proof-reader.

Furthermore, who can use it? Only people who don't need it! Skedpal will be effective largely for people who initially know their own propensities and preferences, people who live by relatively regular weekly schedules, and therefore can input their pre-existing restrictions and requirements into Skedpal's A-I rather specifically at the outset.

And yet ... who knows these things? Is your life already predeterminedly specific? Mine's not! Do YOU know if you are more creative before lunch or after dinner? And will that be the case EVERY SINGLE DAY and FOREVER? Are you aware of whether you prefer meeting with people on weekdays or on weekends? Can you predict exactly how much time a given task will require, even before you start trying to perform that task? Then, after you've predicted, do you always stay within that estimate, or, more likely, do some things (duh!) run over-time regularly? Likewise, is it easy for you to identify the higher priority between (f.e.) yearly taxes or monthly accounting reports? Can you name right now all the upcoming tasks for this week, month, year, so that Skedpal can appoint them in advance? Or is it much more likely that at a last minute you will be assigned a task which you hardly have time to write down before it's due? In short, do you live a hierarchically planned life? In which case, go ahead, input it into Skedpal. Or are you simply unable to tell Skedpal just how various you are, like most of us?

Well, Skedpal needs you to be regular. I'm not. Some day, Skedpal's team may figure out how to accommodate creative, random, or non-rigorous lives, and they may decide to do so by means of something other than requiring that we be different people. But right now, it seems, if you aren't ALREADY a time-managing anal-retentive executive who has mastered "Who Moved My Seven Habits" and "The Eleven Cheeses of Highly Productive People" and "Rich and Grow Think", then you won't be able to START inputting your needs into Skedpal in order to benefit from USING Skedpal. Cart before horse, chicken and egg, types of problems. Good app for people who probably don't want or need it; yet, can't be used by people who might benefit from it.

Its purpose contradicts its use. And the programming so far is inexcusably negligent. Zero stars.

SkedPal is a program that automatically optimizes your calendar on demand. It's used by people who put the vast majority of their tasks on their calendar as a scheduling assistant. It reaches into a user's calendar and re-juggles their tasks to achieve an optimal result whenever a particular command is given. Here are some other auto-schedulers.

Timeful was a standalone app before it was bought by Google in 2015 and some of its features can be found in Google Goals. It promised machine learning and AI-powered rescheduling. In late 2016, Todoist released a new feature called Smart Schedule which offers similar functionality.

By contrast, SkedPal gives the user practical ways to plan a schedule. It asks for information such as a task's priority, duration, start date, due date, project and time map in order to do its calculations. So far, IMHO, it appears to produce more consistent results than the approach taken by Timeful and Todoist, which rely more on factors outside the user's control, such as databases of all users' task history.

Programs like Sheldonize, TimeTo and Focuster appear to offer capabilities which are more aligned with SkedPal, where the user is given more control over the scheduling of future tasks.

I happen to be studying these apps on a Beta site I launched - Schedule U.

Such an insightful review, I didn't know any of them. Thank you!

Said about SkedPal as an alternative

Probably the best system for Automated Time Blocking, but very expensive
Positive comment • over 1 year ago • as an alternative to 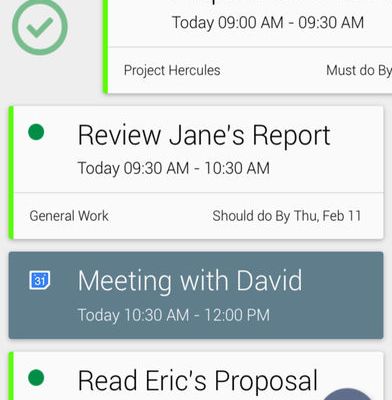 Our users have written 2 comments and reviews about SkedPal, and it has gotten 2 likes