What is SiteOrigin CSS?

SiteOrigin CSS is the simple, yet powerful CSS editor for WordPress. It gives you visual controls that let you edit the look and feel of your site in real-time.

INSPECTOR The hardest part of editing your site’s design using CSS is usually finding the correct selector to use. The powerful inspector that comes with SiteOrigin CSS makes this easy. While viewing a full preview of your site, just click on an element and it’ll help you identify the best selector to use to target that element.

The Inspector will help you even if you have no idea what a CSS selector is.

VISUAL EDITOR Don’t like playing around with code? No problem. SiteOrigin CSS has a set of simple controls that make it easy to choose colors, styles and measurements. Combined with the Inspector, you’ll be able to make changes in just a few clicks.

CSS EDITOR SiteOrigin CSS has a powerful CSS editor, the likes of which you’d usually only expect from high-end IDEs. It has autocompletion for both CSS selectors and attributes. It also features very useful CSS linting that’ll help you identify issues in your code before you publish your changes.

IT’S FREE We’re committed to keeping SiteOrigin CSS, free. You can install it on as many sites as you like without ever worrying about licensing. All future updates and upgrades will be free, and we even offer free support over on our friendly support forums.

WORKS WITH ANY THEME There’s an ever-growing collection of awesome WordPress themes, and now with SiteOrigin CSS you can edit every single one of them to your heart’s content. No matter what theme you’re using, SiteOrigin CSS will work perfectly.

DOCUMENTATION Documentation is available on SiteOrigin.

SUPPORT We offer free support on the SiteOrigin support forums. 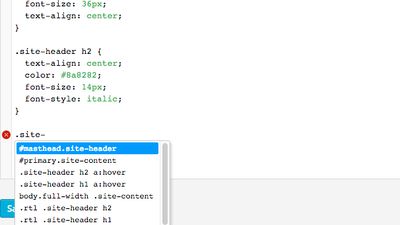 Our users have written 0 comments and reviews about SiteOrigin CSS, and it has gotten 0 likes

View all
SiteOrigin CSS was added to AlternativeTo by RemovedUser on May 6, 2019 and this page was last updated May 6, 2019.