What is Simple Machines Forum?

Simple Machines Forum — SMF in short — is a free, professional grade software package that allows you to set up your own online community within minutes.

Its powerful custom made template engine puts you in full control of the lay-out of your message board and with our unique SSI - or Server Side Includes - function you can let your forum and your website interact with each other.

SMF is written in the popular language PHP and uses a MySQL database. It is designed to provide you with all the features you need from a bulletin board while having an absolute minimal impact on the resources of the server. SMF is the next generation of forum software - and best of all it is and will always remain completely free!
Show full description ▾

I recently switched to SMF because I was having issues with my members uploading on Wordpress and drupal plugins. Is fast, smooth, and very customizable. Best of all. it looks nice and its FREE!

Used to be great during the golden era of forums. Then it got managed to death during the last decade. Last stable release was six years ago. Customization is wishful thinking due to messy code and awful templates (hard-coded HTML/CSS/JavaScript). Mods are non-existent or heavily out of date with no support from the dead modding community. SMF 2.1 beta has been in development since SMF 2.0 release (2011) but while it fixes one thing with every beta release it also breaks at least two.

If you are looking for reliable, up to date, forum software with at least a decent level of support and don't want to commit seppuku every time you want to customize it, look somewhere else.

SMF provides a decent amount of functionality which users might have come to expect from forum software but suffers from hopelessly archaic architecture and horrible code base.

In terms of customization, most plugins are either obsolete or do not work anymore with themes being nothing less than one giant mess of templates choke full of entangled inlined blocks of Javascript and PHP practices back from at least ten to fifteen years ago.

The plugin system also uses a really weird integration system which is more likely than not to break the entire forum between minor updates of SMF or the plugins themselves. I guess it's a good thing then that the usual release cycle for major versions of SMF is ten years or longer...

The bottom line is, if you intend to use SMF for anything else than just playing around, even in these trying times when forums are quickly becoming obsolete, you would be far better off by just going straight for some other solution. SMF, as of right now, is just a relic with no redeeming qualities in 2022. 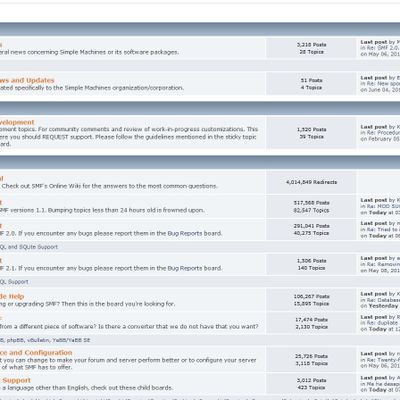 Our users have written 3 comments and reviews about Simple Machines Forum, and it has gotten 33 likes