Scratch is a programming language that makes it easy to create your own interactive stories, animations, games, music, and art -- and share your creations on the web. As young people create and share Scratch projects, they learn important mathematical and computational ideas, while also learning to think creatively, reason systematically, and work collaboratively.
Show full description ▾

It Is Very Simple And You Can Make Lots Of Things Out Of It, But It's Not Real Code

most of us don't care if it's real or not as long as its fun.

Reply written about 1 year ago

In terms of learning coding, yes it does the job in letting you know really basic things about programing. Scratch is also a lot more approachable for kids rather then giving them a textbook. I think people of all ages can benefit learning coding from scratch. Here are some reasons why I think it really get's bad for scratch.

#1 It has become a social platform but for a lot younger audience. Obviously there is reporting which works and some built in moderation. But still your giving jimmy access to online people that are definitely not supposed to be in his friend group. You think he's coding but really he's doing something a lot different.

#2 Once somebody who understands scratch to some basic degree and feel that they really like coding. Scratch or the community should suggest or push there people to regular coding. Could be in game engines, could be in windows notepad either way they need to go do some actual coding with their new found hobby.

#3 some people that use scratch end up finding coding is not there thing and realize oh I can make animations in this program. There not making animations the proper way at all. They should be moving to krita or blender where they actually make animations. People that make animations on scratch also now at a pretty young age have a social platform. WHY? If there 13 and older a youtube account is available with parental consent.

I just don't get how people say Scratch is proper coding or programming.

Reply written about 2 months ago

I might be a teen but I still love scratch it a fun and simple website. and all of you guys who hated keep your opinion to yourself.

Scratch is unquestionably the best app for young kids to learn to write code. It's the standard against which anything else is compared.

A good idea gone downhill when it comes to the platform itself. Scratch used to focus on learning programming through play with a supportive community in the early 2000's when it peaked. However, the site has become more politically focused with a different community similar to Twitter.

The application itself hasn't changed apart from being re-created two times in different coding languages, moving away from Squeak and enabling the use of vector graphics. The most recent version released, 3.0 was launched with several glitches involving the image editor. It's been a decade or more now and I don't think Scratch team intends to actually improve the editor in terms of teaching programming. The editor fails to include classes and the cloud data variables are pretty unusable in game creation. i.e if you wanted to make a game with save data for the user, you cannot out of Scratch team's fear of chat rooms being made.

If you want a fun, easy entry to learning programming, use the 1.4 or 2.0 application privately. However, at this point I would recommend using Bluej as a good alternative, since Java has been a huge programming language for years now bluej and they provide an easy to use editor for beginners.

While Scratch is good as a starter animation platform, it falls short for teaching programming and for complex animations (like gravity simulations with multiple clones). It has a very limited feature set and the current Flash player and editor as unbearably laggy and finicky to work with.

If you are seriously considering learning how to program, but still want to start with an intuitive drag-and-drop interface, check out the fork of Scratch (version 1.4) known as Snap!. It is far more powerful (first class procedures, first class lists, first class objects, first class continuations), includes all the same animation tools (and more), and runs way smoother.

Snap actually falls at the programming. While i kinda like it,it lies staight out of warp. warp just does what's put in there. and yet,the report block's even avilabe NOT for reporters. that Seems Striaght Stupid. 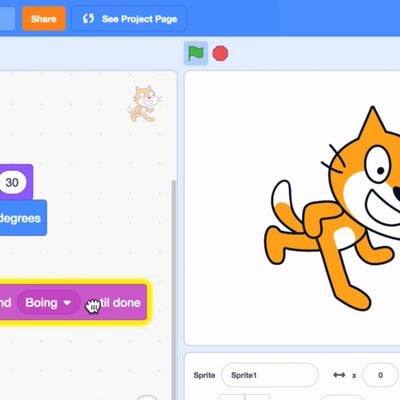 Our users have written 7 comments and reviews about Scratch, and it has gotten 94 likes