Rpgboss is a RPG game creating software like RPG Maker, very easy to use and no-programming knowledge need.

The project seems no longer developed. Latest commit dates back June 2017 and latest pre-release, 0.9.8, on December 31, 2015. It can be still downloaded from GitHub.

For those interested, there is now a forum for those who use this - hopefully it grows into something useful for new users!

Thank you so much! Very helpful! :)

Hello! i am a big fans of games.and in a few years.I have a quetion.
How games are made? and can I also make one?
Then I discovered there are some engines to make games but...,I am not good at programing.
and the two best game engine (Game Maker and RPG maker) are shareware.
But recently there are some other alternative being developed.
for the game maker,I found Enigma Engine and its looks so similar
and for rpg maker i found many simmilar alternatives and i have compare some of them
and this is some reason i choose RPGboss are:

1.Very cool editor look
2.the best built in ghrapic (the tilesets its look like for vx)
3.unique stats system and maybe its easier
4.already work battle system(but its not perfect yet)
5.many more cool recources at the website asset serfer and a sample game (lost ghost mansion)
6. 3 tile level (the other is only 2)

I really like this app. It is a completely free alternative to RPG Maker. I haven't used RPG Maker that much, but from what I can tell, the style is similar. Currently, it even comes with some RPG Maker sprites & tilesets.

Unfortunately, development has not been very active recently & it needs many improvements & fixes. I commend the developers on an excellent job. The design is well done. But there is much work to be done & many open issues & requests remain open on the GitHub project page.

Some improvements/fixes I think it needs:

Some things I don't really like, but perhaps not as important:

While I do have many complaints about RPGBoss in its current state, there are very few free & open-source 2D RPG game making projects at its level. I would say that the best free alternative to it is RPG Toolkit. However, in my opinion, RPGBoss has a one-up on RPG Toolkit as games produced with it can be played on multiple platforms. While RPG Toolkit currently only supports outputting Windows binaries. 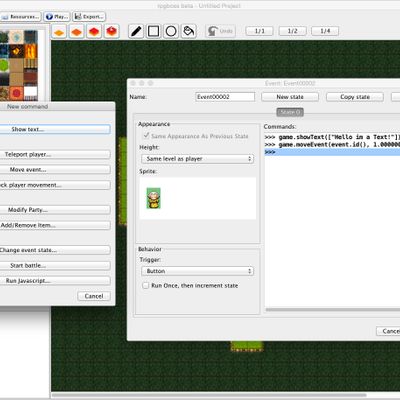 Our users have written 3 comments and reviews about RPGBoss, and it has gotten 14 likes

View all
RPGBoss was added to AlternativeTo by paulolol on Mar 4, 2014 and this page was last updated Nov 12, 2021. RPGBoss is sometimes referred to as RPG Boss.