Rebol (historically REBOL) is a cross-platform data exchange language and a multi-paradigm dynamic programming language designed by Carl Sassenrath for network communications and distributed computing. It introduces the concept of dialecting: small, optimized, domain-specific languages for code and data.

Douglas Crockford of JavaScript fame has described REBOL as "a more modern language, but with some very similar ideas to Lisp, in that it's all built upon a representation of data which is then executable as programs.", and as one of the JSON influences.

According to its designer dialecting is the most notable property of the language: “Although it can be used for programming, writing functions, and performing processes, its greatest strength is the ability to easily create domain-specific languages or dialects."

⚫︎ PortableREBOL can be used from a USB stick or similar with no prior installation.
⚫︎ Support for scriptingREBOL supports scripts and macros to automate or customize tasks.

Said about REBOL as an alternative

Red is actually an implementation of REBOL with some differences. Even Red compiler is written in REBOL. 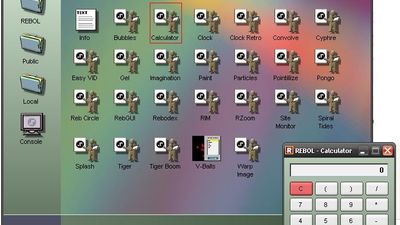 Our users have written 0 comments and reviews about REBOL, and it has gotten 15 likes

View all
REBOL was added to AlternativeTo by mer30hamid on and this page was last updated .