ReadyBoost is a disk cache component of Microsoft Windows, first introduced with Microsoft's Windows Vista in 2006 and bundled with Windows 7 in 2009. It works by using flash memory, a USB flash drive, SD card, CompactFlash or any kind of portable flash mass storage system as a cache. An internal SSD can also be used for increased performance, but has the same limitations as smaller flash drives (such as 32 GB per cache file).

Using ReadyBoost-capable flash memory (NAND memory devices) for caching allows Windows 7 and Vista to service random disk reads with performance that is typically 80-100 times faster than random reads from traditional hard drives. This caching applies to all disk content, not just the page file or system DLLs. Flash devices typically are slower than a hard disk for sequential I/O so, to maximize performance, ReadyBoost includes logic that recognizes large, sequential read requests and has the hard disk service these requests. When a compatible device is plugged in, the Windows AutoPlay dialog offers an additional option to use the flash drive to speed up the system; an additional "ReadyBoost" tab is added to the drive's properties dialog where the amount of space to be used can be configured. 250 MB to 256 GB of flash memory can be assigned (4 GB in Windows Vista). ReadyBoost compresses and encrypts, with AES-128, all data that is placed on the flash device; Microsoft has stated that a 2:1 compression ratio is typical, so that a 4 GB cache could contain upwards of 8 GB of data. 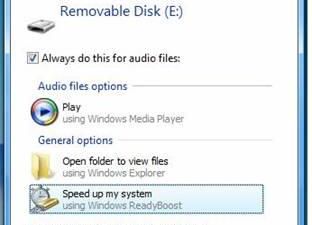 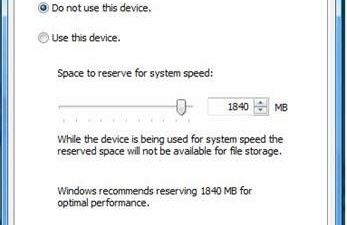 Our users have written 0 comments and reviews about ReadyBoost, and it has gotten 3 likes

View all
ReadyBoost was added to AlternativeTo by Danilo_Venom on and this page was last updated .