As posted on their blog, Raptr will close on September 30th, 2017: http://about.raptr.com/goodbye-raptr/

Was initially happy with the service but my opinion of the company changed dramatically when I was banned. Admitting to "piracy" on the forum (when asking for a new game detection scheme) is enough to get you thrown out, not just from their forum but from the service itself. No second chances, no appeals. It is clear that these people are a bunch of fascists who like to suck up to big gaming.

Better to go with Evolve. Their game detection scheme is neutral in the sense that it doesn't discriminate against any potential sources for games. It just works. No need to detect a game or beg some fascist mods to add it to a list.

Only thing missing now is a server browser! They should really make that prior.. because that's one of the reasons people stick with xfire. 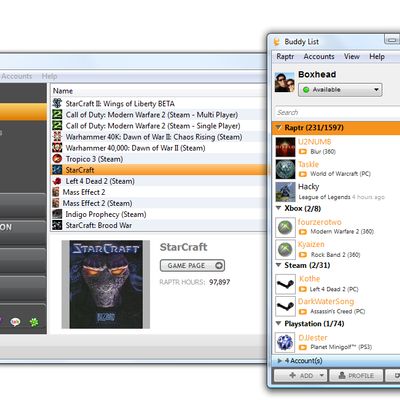 Our users have written 3 comments and reviews about Raptr, and it has gotten 76 likes