Paper.io online is a game of the type Agar.io: a very basic game but that will undoubtedly hook you from the first game . Specifically in this game you will have to conquer territory by making rectangular or square shapes. The bigger the rectangle you draw, the more territory you will have won and the less chance there will be for you to eat.

An addictive game from the first game.

Of course, the more territory you conquer at one time, the higher the chances of being eaten. But, the bigger the territory you try to conquer, the faster you will go. While you are on 'adventure' you are more susceptible to being eaten, because you generate a wake. If someone touches that wake, you're finished.

While you are in a new field, they can not kill you , but they can steal a portion. A possible strategy can be to put you in defense mode (not leave your territory) and kill everyone who enters. When there is no one, we could go out and expand the territory.

If you collide with your own wake you will also be dead. To close the rectangle, you can only do it from conquered territory (that is, you can not use your trail). To eat someone, you will have to go over his wake or failing over his head. But be very careful, because if you clash head on you will both die.

In no case will be necessary to install any application, because it is a web app . That is, nothing more than we need a web browser and a PC to play . We can also play from a mobile phone or a tablet , but it is much more complicated because the game is not designed for touch screens. We will not be able to play offline (even with the web in cache), since the game is online with more players.

Paper.io is an extremely addicting game that you probably won’t be able to stop playing for quite some time once you get into it. The core gameplay of Paper.io is quite simple but on paper but, even so, it still takes a while to master and is sure to have you captivated for countless hours as you try to paint the entire playing field with your color.

It’s worth mentioning that Paper.io doesn’t come with any tutorial sequence built into it which is why you’ll have to learn it on your own. Thankfully, there’s nothing too complex about the game so you’ll likely be able to get the hang of it quite easily in just a few minutes of playing.

In Paper.io, the objective is to control as much territory as you can and, in order to do so, you’ll have to take control of a square-shaped object that you’ll have to move around the playing field. When you get into the game, you’ll only have a small amount of territory for yourself and it’ll be up to you to keep expanding this territory until you have control of the entire playing field. In order to expand your territory, you’ll have to leave your home area, move across the area you want to control and then return yourself to an area that you already control. If you successfully do so, you’ll have control over all the territory that you moved across and it’ll change its color from white to whatever color your object is during that particular session.

To actually win in Paper.io, you’ll have to eliminate your opponents and the way to do this is by either taking over their territory chunk by chunk or by destroying them altogether. You can take over enemy territory by doing the same thing you do with the normal territory but, in order to destroy them, you’ll have to catch them when they’re out of their home base. If you spot a player who isn’t at home base and is trying to expand, you can actually destroy them completely if you can strike their tail with your character. This is definitely a risky thing to do but, if you can pull it off, it’ll be worth it because you’ll get access to a whole lot of territory that you can then take over.

In terms of visuals, Paper.io isn’t really anything to write home about but, nonetheless, it’s a pretty clean looking game that’s nice to look at thanks to all the different colors of players taking over territories.

The game is completely free to play so you’ll be able to play it whenever you want to without any restrictions. 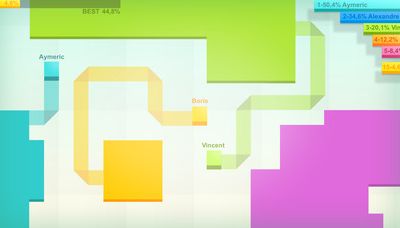 Our users have written 4 comments and reviews about Paper.io, and it has gotten 4 likes