OpenNIC is a user-owned and controlled alternate network information center/alternative DNS root which lists itself as an alternative to ICANN and its registries.

If you are looking for an open and democratic alternative DNS root, if you are concerned about censorship, then OpenNIC might be the solution for you

As of 2006 users of the OpenNIC DNS servers are able to resolve all existing ICANN top-level domains as well as their own.
Show full description ▾

I'm gonna give my experience and honest opinion from my few days using, and subsequently looking into the Opennic network/dns servers. This is mostly opinion, and a little speculation. But I have been known to look into things a little harder than your average person is interested to. It's my natural skepticism, but it has granted me greater insight about many things others missed.

TLDR: I really believe Opennic is a honeypot. In plain english, that means i think it is a trap put in place to monitor potential criminals on the internet. It would be too long to put all of the red flags, but here are a few.

Unlike NextDNS, the OpenNIC Project does not support parental control.

does your electricity provider has parental controls or is it up to your own self to baby-proof the sockets?

I like that OpenNIC is a volunteer-operated service and aims to prevent internet censorship, as well as being user-owned. The only problem with it, so far, is that many of its sites don't seem to be active yet. 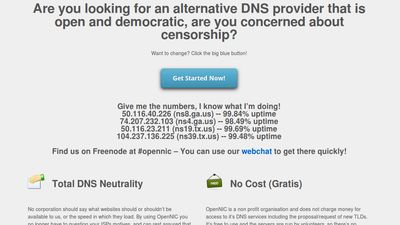 Our users have written 3 comments and reviews about OpenNIC, and it has gotten 32 likes