What is MAGIX Music Maker?

MAGIX Music Maker is perfect for composing music: stunning songs, experimental beats, and exciting soundtracks! It offers everything you need to make your own music:

* A massive sound archive featuring over 1,500 sounds and loops
* Ability to record on 64 audio and MIDI tracks
* Mixing console including effects, remix tools, and synthesizers
* Burn CDs in the official standard of music labels and the record industry

If youve never made music, you can still get started right away and make songs. If you are a musician, you will love the software tools available to polish your masterpiece.
Show full description ▾

An awful, buggy, unreliable app. It is extremely slow to the point that its playback lags on a performant PC, and the UI is redrawn with snail's speed; Ctrl+Z with 30+ samples can take 5 seconds to proceed. And that's just with max 8 tracks for sampling in the free version!

Their new default "audio engine" takes monopolistic access to your sound card, meaning that no sounds can play while this app is launched. You can't even check whether your export is good.

Moreover, I've written tons of automation for several tracks in one project, and the next launch they were gone. Then, after I redid it all, it revealed that automation doesn't work on a specific time frame, though everything works ok in the app.

Two days of frustration and anger after 2-3 hours designing the soundtrack. And ofc this is not my first track, I suffered a lot with it -.-

I have tested free version on 02-July-2019 and it was quite a hideous experience. The download takes about 2 hours, it installs "Magix PC check & tuning" without any warning (!!!!!!). The DAW itself is very poor: 3 synths + very boring loops.

My plan was to use Magix as a simple sample machine/tracker, but the samples operations are very limited - no stretching on the fly, no pitch correction, beat slicing and etc.

More decent free alternatives:
I have tested free Presonus Studio One 4 the same day (their free pack for beginners) and it was awesome in comparison with poorly designed Magix. Free Soundbridge is also very funny, as well as LMMS (especially when leveled up with various free VSTs).

I and a friend of mine wanted to get into the music business and we were trying to find a good program to make beats and let us record. Originally we used audacity, and that was ok, but not really good for the task. This is the best DAW I have found that is inexpensive, and it allows you to have and do just about everything you need to have great music and songs. 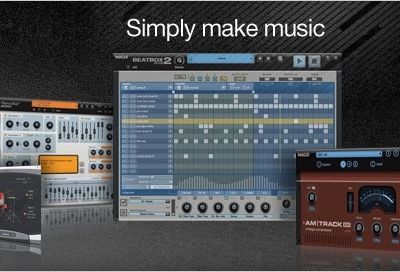 Our users have written 3 comments and reviews about MAGIX Music Maker, and it has gotten 21 likes