miniBSD is a project to develop a set of scripts that shrinks a running FreeBSD system to a small sized miniBSD distribution suited for small media like USB pens and CF cards.

The size of the distribution is usually 12-15M (it fits in a 16M flash) and contains everything you usually need to run a full FreeBSD system in a confortable way. We decided to start this project after reading about a similar idea on Martin Kasper's site (see credits below) and mainly because we need a FreeBSD system that could be fitted in a small compact flash without loosing too much of a full FreeBSD system ease of use. So it is half way between a PicoBSD system (floppy size) and NanoBSD or penBSD.

miniBSD project provides a set of scripts that, starting from a running FreeBSD system (4.x, 5.x, 6.x and -CURRENT), automagically collect the necessary binaries, libs, config files and finally creates the disk image that can be dumped on a CF card or USB pen.

miniBSD is currently running in many custom configurations in different production enviroments. We have deeply tested it on EPIA mainboards but it is supposed to work fine in every i386 system compatible with FreeBSD itself. It is a optimal choice to develop routers, bridges, firewalls and vpn gateways. 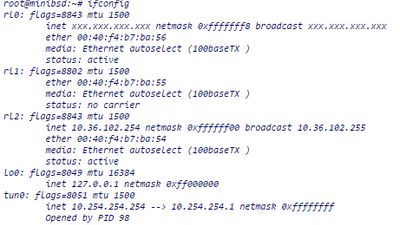 Our users have written 0 comments and reviews about miniBSD, and it has gotten 0 likes

miniBSD was added to AlternativeTo by wisd0m on and this page was last updated .