MESS emulates portable and console gaming systems, computer platforms and calculators. The project strives for accuracy and portability and therefore is not always the fastest emulator for any one particular system.
MESS supports 231 unique systems with 738 total system variations and is constantly growing.

The license would be open source if it wasn't for the "no commercial use" clause.
Show full description ▾

MESS is an amazing project. Its principle is to use a modular approach to emulate as many systems as possible, as accurately as possible. The modular structure, which is derived from the MAME arcade emulator project, has obvious advantages. Developers are less prone to reinvent what is already emulated somewhere else. They can focus on what's different between systems, rather than what they have in common, supporting the addition of a much larger number of systems and system variations. Also, each developer can focus on the systems and chips they know most about, rather than having to dabble in emulator architecture and other stuff, just to get a basic version running. If someone significantly improves the emulation performance for a certain CPU, all systems that had that particular CPU built in will profit from the changes. It's that awesome.

What this results in is the massive scope of the emulator. At the time of writing this review, MESS (version 0.148u1) emulates 674 systems and 1083 system variations, ranging from popular systems such as Commodore 64 or Nintendo Game Boy to obscure machines like Arabic MSX clones or almost-forgotten Soviet home computers. Of course the degree to which emulation works varies wildly, from barely being able to booting up the system, to rivalling or even outclassing the other emulators in the field. A good example for the latter would be Philips CD-i, for which there is simply no other emulator with the compatibility of MESS. And the best thing for the end-user is, of course, that they have to download only one application, and learn one configuration and user interface. With the re-merger with MAME currently in progress, this unifying approach will expand even more. (See UME, which aptly stands for Universal Machine Emulator.)

I always give MESS a go before trying out any of the more system-specific emulators, and I have made many good experiences and saved a lot of time that way. And don't forget about the hundreds of systems that no one besides the MESS team even considers.

Finally, a more philosophical point of view: MESS is one of the most important actors in the field of computer hardware and software preservation, a criminally underrated field of preserving 20th century and current history. The combined knowledge that the MESS contributors have amassed and keep compiling is mind-blowing, and I am convinced that it is just a matter of time until the project gains some big-time public recognition for their efforts. People will realise that it is not just about some kids getting to play old video games, but maintaining a documentation and infrastructure in order to prevent a considerable part of recent history—the digital parts of our lives—from disappearing forever. 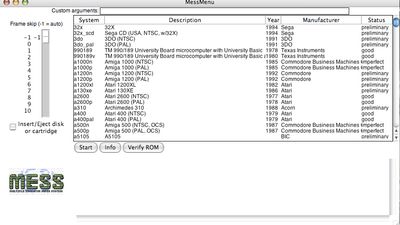 Our users have written 1 comments and reviews about MESS, and it has gotten 12 likes