LimeSurvey (formerly PHPSurveyor) is an Open Source PHP web application to develop, publish and collect responses to online & offline surveys. Anonymous and Not-Anonymous survey, open and closed group of participant surveys, optional public registration for surveys. More than 50 different languages in frontend and backend.
LimeService is a survey service-platform to prepare, run and evaluate on-line surveys. Besides basic free usage you are always getting the full feature set with no monthly fees or subscription plans: https://www.limesurvey.org/
Show full description ▾

I never understood why this is marked as "Freemium".

Yeah, it is totally open source. There is a paid/managed version, but this is an incredibly common model for open source software. There's absolutely nothing crippled in the free version or any additional functionality in the paid version. The only major difference is that the hosting (therefore config and maintenance) is managed which, again, is incredibly common in the open source world. Devs gotta eat! I think they may get version updates a little faster (or at least used to) but that doesn't amount to a significant difference in the software.

Most of the other truly free and open source options for this either went under or were bought and torpedoed a long time ago. A few names solidified their control of this market and said "no free lunch." Yes Google Forms and Microsoft Forms, I'm looking at you. 🤨 You guys could at least expand the functionality, act like you're trying at least.

Then you have Survey Monkey and JotForm, which are both definitively freemium—though less so JotForm than Survey Monkey, because you get a lot with free JotForm but you're badly limited in the number of surveys you can run.

LimeSurvey is unequaled in this market as a free open source software. They should really make a distinction between LimeSurvey, LimeSurvey Pro (the 100% hosted service), and The ComfortUpdate Extension (just saw this, they update your self-hosted install for you 🤷??? ...I'm not in love with the name).

I gave LimeSurvey a fair shot to show me that it's really a production-ready OpenSource software, but it isn't.

I would have loved to be able to tell you, that I'm using LimeSurvey and it simply works great, but it doesn't. It's packed with features, but the most basic ones don't work properly. I would love to see this change and even support improving it by myself, but for now I have to find another survey platform.

I really dig Lime Survey. It does some things that other apps charge a lot of money to do (if they do at all). It's almost a misnomer to call it "freemium" because they only charge you anything if you want them to host it, it isn't crippled or anything. That said, it kind of requires a little bit of development experience to get all the things working together for free.

I have not used this software enough for a complete review.

On a local machine, using XAMPP:

Unless your time is worth next to nothing, your requirements are simple or you have endless patience, this is not usable software.

If the authoring tools were more responsive much else could be forgiven.

If the features you need are not too complex I recommend Google Forms or EUSurvey instead.
If you want to embed more complex surveys into your own website then try the open source survey.js, it is very good.

If you can somehow afford the enterprise plan, SurveyMonkey is an easy and also powerful solution.

That's the thing. I can wade through some code (to be fair, I rather swim in it) for an open source free tool of this magnitude. I almost take issue with it being called "Freemium", but it's one of those edge cases. Almost all others are quite expensive or pitifully feature-light. I won't deny that survey.js looks promising, and quite polished (the site anyway) but I'll have to check it out and get back to that.

Like it to be opensource, but setup for email is pain-in-the-ass

I had to use LimeSurvey 2-times because it is the only one web-based survey system which supports some very specific and non-usual features (like ordering answers, logging IP-address of respondents) and doesn't cost much. But it was big pain in tail to work with it as creator of new pool! Its design principles are like semi-organised chaos, even for one small change one needs to look to another pages, the interface isn't enough integrated and it is very simple to miss some small, yet very important, setting. Beside this terrific user interface, it is very, very feature rich (with some very important ones, like branching answers, and some quite useful, like translating whole survey into another language!) - I hope the developers will clear the interface so I will be using it with joy!

It could have better documentation. To be fair though, they recently migrated to Twig for templating and I am curious to see if people pick it up faster now. I think the UI development stalled for a while because of that. The whole thing is them-able, so if you don't like the backend you can just change it. The features are pretty hardcore, and I feel like a lot of people miss that, especially now things like SurveyMonkey are so obtrusive. 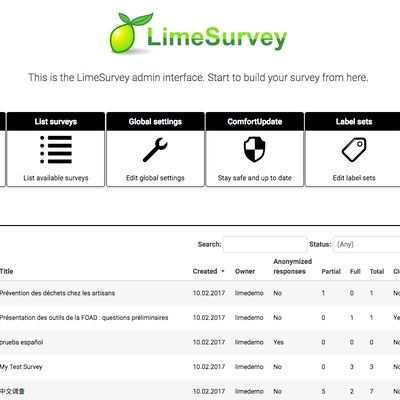 Our users have written 8 comments and reviews about LimeSurvey, and it has gotten 87 likes

View all
LimeSurvey was added to AlternativeTo by s_ktt on Nov 26, 2009 and this page was last updated Jul 3, 2020. LimeSurvey is sometimes referred to as PHPSurveyor.