What is Lightning Calendar?

Organize your schedule and life’s important events in a calendar that’s fully integrated with your Thunderbird or Seamonkey email. Manage multiple calendars, create your daily to do list, invite friends to events, and subscribe to public calendars.

Sunbird (Sunbird is discontinued) calendar to the popular email client,

Lightning by Mozilla Calendar Project is an add-on for Thunderbird, but I am looking for a standalone calendar.

Price-wise (free) and feature-wise, Lightning is great. It's got every feature you could think of. Unfortunately, there are just enough bugs in it to be annoying.

The biggest problem is sync errors. If you delete a recurring entry in Lightning, it can (not always, but sometimes) delete the event, but not update it online. Then it's downloaded again. It's not deleted but it's flagged as deleted, so it's duplicated, then re-duplicated, then re-re-duplicated, etc. I've seen a calendar entry with 300+ duplicates. If you delete the calendar in Lightning before it syncs and screws up the web calendar too, you can just recreate it and you're fine. But it's an issue.

If you flag web calendars are read-only in Lightning and only update them online, there's no problem.

The other issue is reminders. If you set a reminder, sometimes you'll get the popup, dismiss it, get it again, dismiss it again, get it again, etc. Sometimes shutting down Thunderbird is enough to stop it, other times it's not. In those cases, the only option is to change the calendar entry to not notify you, otherwise, you'll get infinite reminders that cannot be dismissed. That's been reported as far back as 2011, and there's still no fix. It's intermittent, but it's a serious problem.

Lightning is a good calendar app, better than the Windows 10 native calendar. But the problems above prevent it from being a great app, unfortunately.

It cannot be found under "View" but SEEMS to be there as 'Calendar' and 'Tasks' are there but grayed out.

It gets me every time - you have to select ""Events and Tasks" and then the tab comes back again! An incredibly silly design! The forums are full of people saying "Thunderbird updated and my calendar is gone" and they are offered a detailed multip-step way of editing config files and stuff. You don't need to do any of that, just ignore the fact it's grayed out and not visible and just click the Events and Tasks button anyway, then your calendar comes back. Ridiculous, but does work.

Thunderbird/SeaMonkey + Lightning have all these features, minus notes and password list. These two missing features can be supplemented by other open source software, such as Cherrytree and Password Gorilla.

So, I believe Thunderbird/SeaMonkey + Lightning are the open source softwares that have the feature set that comes closer to EssentialPIM. 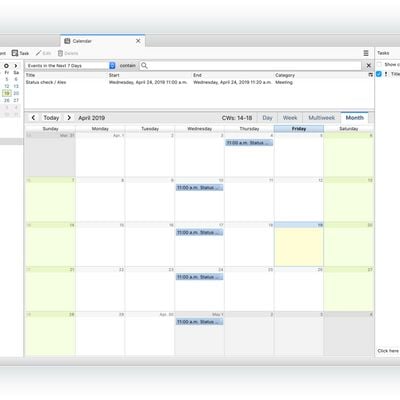 Our users have written 5 comments and reviews about Lightning Calendar, and it has gotten 178 likes