The main goal of KickassTorrents is to provide users with a user-friendly interface that will make search of torrents easier and more organized. We do our best to establish a new high standard for torrent sites and lead the whole community of p2p users into a new era.

KickassTorrents or KAT is a torrent search engine launched in 2008 and is operated by a dedicated team spread all over the globe.

Starting from day one KAT was aimed on establishing a new standard for torrent search engines and providing a user-friendly interface that will make the search of torrents easier and more organised.

KickassTorrents is not a tracker and hosts no content, we provide only access to already available torrents in a same way Google and other search engines do.
Show full description ▾

Kickass Torrents survived many threats since its inception and brought the best free content for us to download, but ultimately, it was taken down in 2016 by the US government agencies. Although Kickass torrents were the best torrenting website for many users, there are various torrent alternatives you can try, to download your favorite content. We have suggested here the 21 best kickass torrents alternatives that you must check out. But remember to use a torrent VPN to avoid DMCA’s and torrent your favorite content anonymously. So, get a torrent VPN and start torrenting anonymously.

If you’re a KickassTorrent user, you’ll have to find another means to torrent media. Its alleged leader has been arrested and the site is now offline.

Vaulin is believed to be the founder of the torrent site, which went live in 2008. He was arrested and charged by the United States because a server for KickassTorrents was based in Chicago.

In a Department of Justice press release, US Attorney Zachary Fardon had the following to say:

"Copyright infringement exacts a large toll, a very human one, on the artists and businesses whose livelihood hinges on their creative inventions. Vaulin allegedly used the Internet to cause enormous harm to those artists.

Our Cybercrimes Unit at the U.S. Attorney’s Office in Chicago will continue to work with our law enforcement partners around the globe to identify, investigate and prosecute those who attempt to illegally profit from the innovation of others."

KickassTorrents was more popular than The Pirate Bay, but was able to avoid headlines (for the most part) until today. The complaint notes it receives 50 million unique visitors per month.

Though it probably goes without saying — don’t expect KickassTorrents to come back online.

We can't open KickassTorrents in our country. We must used VPN to open that site.
But I don't think that a big site like KT will be off, because KT is providing us with more and more stuff we need :D

jonsemar - You were right! Gizmodo reported that the KickassTorrents is already back up and running!

We don't know how the whole KAT situation will develop. That being said, I strongly recommend not dispersing rumors around and trusting only Torrent Freak when it comes to torrent-related news. See their tag "kickasstorrents" for more info on this matter.

Disclaimer: I'm in no way affiliated with TF, but it's my main source of news on these subjects, and I hope it can shed a light for you too.

To be honest, now the domain kat.cr is dead, but some of the Kickass Torrents devs are still not arrested, and revived KAT in a new URL : kickasstorrents.to

When btjunkie went under, I tested the set of alternatives and this was my favourite. It's like btjunkie meets what.cd. 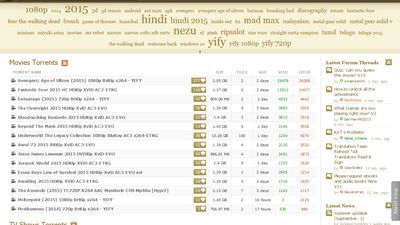 Our users have written 4 comments and reviews about KickassTorrents , and it has gotten 203 likes