What is Kerbal Space Program?

Kerbal Space Program is a multi-genre game where the players create their own space program.

In KSP, you must build a space-worthy craft, capable of flying its crew out into space, without killing them. At your disposal is a collection of parts, which must be assembled to create a functional ship. Each part has its own function and will affect the way a ship flies (or doesn't). So strap yourself in, and get ready to try some Rocket Science!

Maneuver your spacecraft from planet to planet, to moon, to asteroids; really, there is no unrealistic limit.

The game has different game modes, you can play the Career Mode if you want to expand and manage your own Space Center, taking on missions and researching new technologies. Or you can play Sandbox mode if you're only interested in flying and discovering the Kerbal universe without restrictions. There is even a mid point between these two, Science mode.
I also features a fun but fairly accurate physics system, with working orbital mechanics.
Show full description ▾

KSP has been going downhill as of recently, there are currently 1000+ open bugs for the game, of which 600+ haven't even been opened by the developers. There are some very serious game breaking bugs that make it almost impossible to play with large ships and lots of parts/mods. Attaching a stock part should not take 3GB of ram to attach

[Edited by Scott, July 16]
just to be clear, I love the game, but the terms of service are a bit invasive and the software is still buggy 8 months later. Credit where it is due, the RAM bug is fixed. 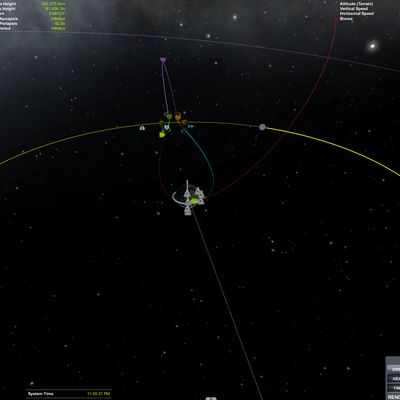 Our users have written 1 comments and reviews about Kerbal Space Program, and it has gotten 23 likes