Infogalactic is an Internet-based, free-content encyclopedia project that is a dynamic fork of Wikipedia and improves upon the online encyclopedia's model of openly editable content. Infogalactic's pages are interlinked in order to connect the user to related pages with additional information, and are categorized in a variety of ways, including Relativity, Notability, and Reliability to allow the user to prioritize his personalized perspective

"The planetary knowledge core" is free of censorship, unlike Wikipedia, and while there may be more alt-right users, there are lefties, libertarians, Greens, anarchists, conspirophiles, and artists who utilize the deep encyclopedia, even if much of it is outdated articles mirrored from the monopolistic Wikipedia that is censored and controlled by Operation Mockingbird, CIA, Mossad, and countless other deep state secret agencies around the world.

The articles are not accurate, out of date and politically spun. 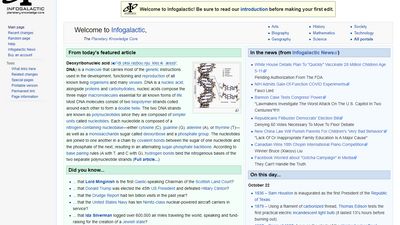 Our users have written 6 comments and reviews about Infogalactic, and it has gotten 30 likes

Infogalactic was added to AlternativeTo by RemovedUser on and this page was last updated .

Infogalactic is a fork of Wikipedia. Therefore, you will find similar information there as on Wikipedia.

I think it's unfair to put only Infogalactic with a banner that suggests that many of its articles are politically spun. Infogalactic was created because the forkers believed that Wikipedia wasn't a truly free encyclopedia that anyone could edit. As for me, I think there's a bias towards one certain political leaning on Wikipedia, except in the hard sciences, so if Infogalactic has a flag for being politically spun, then so should Wikipedia.

Another example is https://archive.fo/5wGgh for the burning down of 'Cultural Marxism' as a page.

Maybe a video would suffice? (I know many are lazy, so timestamp 0:30 should be of interest here.) https://invidio.us/watch?v=wIYhE-hei2Y youtube link : https://www.youtube.com/watch?v=wIYhE-hei2Y . Don't be offset by the video's title and judge it. It's only 2 minutes.

Those were just some preliminary examples. Now for some comparisons. I pull these examples from this URL (https://saidit.net/s/InfoGalactic/comments/8xr/infogalactic_is_an_uncensored_deeplinked_wiki/ ). I leave here the infamous Pizzagate articles. Compare IG with Wiki, and see which one shows less bias.

Perhaps we should also look at Russian interference in the 2016 US election?

If you bother to look at the Russia one, you will see that IG has opted to provide sources to the contrary of what Wiki's article says. Why don't those links appear in Wiki's article?

Don't misunderstand me and attempt to apply motive behind my writing. I'm only giving you what I have researched.

I'll quote some random on their thoughts:

"One of the most troublesome requirements of Wikipedia is for information to be sourced from secondary sources. In practice this means anything you add must come from a secondary source, or your change will be reverted. The existing page may itself come from primary sources, but will be left unchanged! Infogalactic's "verifiability" is a much better criterion than "secondary sources", but it leaves the door open to "original research", which might cause problems - it is an invitation to dump rambling essays on Infogalactic. Wikipedia's editors tend to litter articles with superscripts such as [who?], [reference required] etc. It would be more constructive if editors tried to chase up some of the loose ends themselves, instead of expecting someone else to do it. It will be hard to find a large number of editors who will work for free while not being control freaks. Perhaps there are not many pages where Wikipedia is positively misleading or non-existent. It may be easiest to curate these pages, and mirror Wikipedia for all the others."

Well that's enough ranting about that.

Compared to Wikipedia, there's no shaking you down for money every year. That alone is a 3 star rating from me.

Given everything that I've placed above, I think Infogalactic is set up to be a fairer curator of information, showing both sides. That's an extra star. It doesn't get 5 stars, however, because I find that many image links are broken on articles, and there are evidently less people contributing.

Can anyone refute what this guy has logically and clearly explained? I won't hold my breath.

Infogalactic provides more realistic information on many controversial topics in comparison with Wikipedia.

Many of their articles are right-wing conspiracy theories.

Fact based and not agenda driven! What a crazy world where Wikipedia is considered factual, and honest information is called "extremist".

Even tho it's not intended to be alt-right only. It has a majority of alt-right users and a lot of conspiracies. I feel like Wikipedia users says that Infogalactic is a alt-right conspiracy website while Infogalactic users thinks that Wikipedia is a Marxist conspiracy website. I don't see the difference, just depends if you are on the left wing or on the right wing. As an anarchist, I don't want to get into politics into a f** encyclopedia website.