iBroadcast is a place to consolidate all of your music online. We organize it for you, make it easy to manage your library and play your music on any computer or device you have without having to sync a thing. Plus, we do it all for free and without any ads.

iBroadcast is not a retail music store. Our service and all of its features are there to make it easier to enjoy the experience, not so we can sell you music. We are also not a subscription music service so you won't have to pay to play. This is your music.
Show full description ▾

It's a nice idea to upload and stream your own music collection, but has a major issues that's keeping me from using it. I have a pretty large FLAC collection of music, about 700 GB. So the idea of being able to upload it here, currently for free, was really tempting. The issue is that, even though I have taken a lot of time correctly tagging my music, iBroadcast doesn't seem to read it correctly and mixes up all the albums. It will scatter songs from one album into several different albums for most of my music.

Fixing your music in their web player is very tedious and time consuming. I've also tried making some changes locally, on my PC with MP3tag (because it's so much easier and quicker) and tried re-uploading. That's when I found out that it's (literally) impossible to remove your music from their servers, even though there is an option to "delete" your music and an option to "empty the trash". When you try to re-upload your music, it won't because the old versions are still on their servers, it just skips over them. I contacted support and they said it's impossible to delete your music. The only option was to manually restore the music, one by one (song by song) and edit the music through their web player. I was trying to re-upload about 400 tracks. I'm not going to manually restore over 400 tracks, one by one, just so that I can try and edit with their tedious web editor.

It's nice that it's free, but the fact that they don't have a premium option is also concerning. Web storage isn't cheap and if I ever do decide to use their service, I don't want to spend a lot of time fixing and uploading all my music, just for the company to go out of business. I'm not sure how they even stayed around for so long without a business model.

But if they can fix these issues, it may be a nice service. But for now, I would recommend Astiga. The benefit for Astiga is that it'll play your music from "cloud" services, my favorite being with pCloud (with my lifetime plan). Astiga also played my music just fine without any issues (the same music I tried uploading to iBroadcast). If you don't mind streaming form your PC/laptop, then another service called Subsonic (preferred) or Plex work well also. 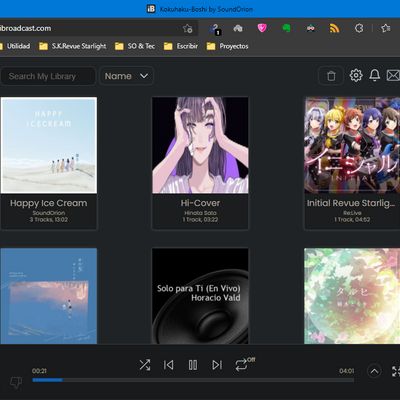 Our users have written 1 comments and reviews about iBroadcast, and it has gotten 3 likes

View all
iBroadcast was added to AlternativeTo by edwardchanjw on Aug 22, 2017 and this page was last updated Dec 1, 2021.