Data integrity test for USB sticks and other media

An advantage over other tools is, that it does not need administrative rights to access the device - but it should not be NTFS formatted, as it does not allow to test everything.

You can FAT32 format hard drive partitions larger than 32 GB with one of the tools from http://www.uwe-sieber.de/usbtrouble_e.html#format

Well, I have to add my ¢2 - this is a great software and saved me few times from paying for so called "64GB SDHC cards", which were fake. Great part of the software is that it writes unique data without repeating itself - this makes sure computer has to write/read every single bit to/from media. Compare it to files created by fsutil command - gigabytes are being moved between drives and partitions in seconds, because those files are empty.

Anyhow, thanks for great software!

I don't know how good is h2testw because I purchased a usb flash drive form Joom (China) of 2 TB (yes , 2 terra bytes) at a price of 9 dollars (february 2019) .
I scaned the drive with h2testw, it took about 2 days, and the real capacity was not 2 TB but 1.990 TB.
I still believe this flash drive is a fake one, despite of what h2testw says .
I know the program is quite old, so perhaps someone found a way to trick it.

H2TESTW fills up the drive with a test pattern and then reads all of it back. This makes it very slow. This is totally unnecessary for detecting fake flash devices. These have the memory multiply-mapped and so we do not need to detect bit errors, we just need to detect gross chunks of data being wrong. RMPrepUSB has a Quick Size Test which can test a fake 32GB Flash device in about 1 minute (good ones take 20-30 minutes). This gives very similar results to H2TESTW but is much quicker, especially if the flash memory is a fake. It does erase the contents though as it tests ALL memory (H2TESTW only tests the area which has no files).

Another alternative is FAKEFLASHTEST which is much easier to use. This has a similar 'fill-up with files' test to H2TESTW but again only takes a fraction of the time that H2TESTW takes (approx. 8 minutes for my fake 16GB USB pen which was actually 2GB) and detects a fake drive much more quickly than H2TESTW (it stops as soon as an error is found too!). It also has the same very quick test that RMPrepUSB has.

Amazing program in my modest opinion, very useful to have in a "toolbox" pen 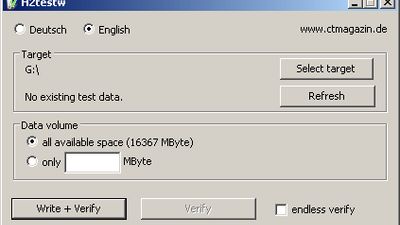 Our users have written 5 comments and reviews about H2testw, and it has gotten 34 likes