Gazelle wants to change the world – one cell phone, one laptop, one iPod at a time.

It is our purpose – and our promise – to provide a practical, rewarding way for people to finally rid themselves of all those old cell phones, digital cameras, and gaming systems that they no longer use, but cant seem to find a way to let go of.

Too often when people think of recycling, they rush straight to smashing things into bits for parts. We believe that reuse should always come first. If your GPS unit still works, why not keep it in circulation AND get paid for it? If reusing isnt in the cards, then let us recycle that vintage camcorder. We think of it as ReCommerce.

Yeah, were green.
Green for you with dollars in your pocket. Green for the environment with fewer electronics being trashed.

Gazelle did not list TracFone among the carriers that they accept, so I called them, and they confirmed that they do not accept phones locked to TracFone.

I ordered an iPad from them. The next day, I got an email telling me that the order was canceled. No explanation. I called them. The first person couldn't help me, because apparently they don't communicate with their own employees, either. She told me that her computer showed that the order had been canceled, but there was no additional information. She transfered me to her supervisor, who told me that my IP address was 1500 miles from my shipping address. That meant I was some sort of hardcore fraudster. I told her that I use a VPN, because it's none of Comcast's business which websites I visit. She said she would pass along my info to her boss, who would call me back the same day. They never called.

Much later that day, I decided to turn the VPN off long enough to order the iPad. They accepted the order. Then 30 seconds later I got an email that the order had been canceled. Obviously I have now been blacklisted. Apparently I'm a criminal mastermind or something. I'm kind of flattered. I need to find a hollow volcano to set up my base in. 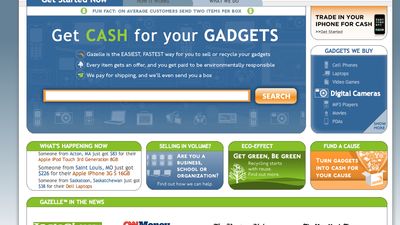 Our users have written 2 comments and reviews about Gazelle, and it has gotten 2 likes