Forms.id is a powerful, yet simple platform for building forms and surveys. We put privacy first and offer a secure alternative to

Private All responses to forms created with Forms.id are encrypted, meaning only the form maker and the responder know the contents of the submission.

Sovereign Response data and form data is hosted and owned by the maker of the form. No data resides on a central server controlled by Forms.id.

Modern Ditch Google Forms and their outdated forms. Forms.id is built on modern technology and we're listening to the features you want!

Login method (Blockstack Browser) has been deprecated, last tweet was from over two years ago 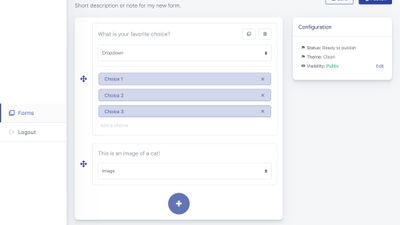 Our users have written 1 comments and reviews about Forms.id, and it has gotten 5 likes

Forms.id was added to AlternativeTo by POX on and this page was last updated .