Easy and intuitive! emuControlCenter is build for people who want to play games quick 'n' easy, without searching too much, ECC supports images and previews them directy in the 'Resultview'. Also there is a 'ImageCenter' build-in for a fullsize preview!

ZIP, 7-ZIP & RAR support It's possible to load and parse roms even when they are archived with ZIP / 7-Zip / RAR. emuControlCenter can get the checksums directly without unpacking compressed files. It's also possible to parse one or more ROMs from a single ZIP / 7-ZIP / RAR-File!

Import & Export images directly from No-Intro / EmuMovies With the build-in ‘ImageControlCenter’ it is possible to import No-Intro (CRC32 based) & EmuMovies (NAME based) images into ECC, you can also export them to these format, it’s fully configurable!

ECC & GTK-Theme support It's possible to costumize how your ECC looks!, you can also select a Gtk+ 2.0 theme to improve the look even further!

Translatable ECC is translatable, so you can choose your desired language, is your language not yet supported?, please register to the forum we'll help you further!

Live! Updates With eccUpdate you can update ECC directly to the most recent version, these updates include fixes/updates/additions. 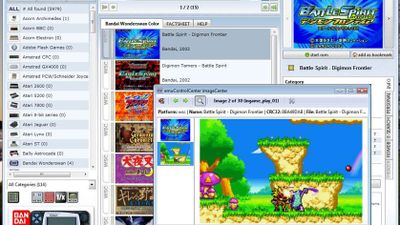 Our users have written 0 comments and reviews about EmuControlCenter, and it has gotten 2 likes

View all
EmuControlCenter was added to AlternativeTo by Thordelan on Jun 1, 2015 and this page was last updated Aug 6, 2019.