What is EML to PST Converter?

EML to PST Converter is an ultimate email conversion and migration tool. However, its functionality extends far beyond working with the formats that gave it its name. The program can convert EML files into the MSG format and vice versa (in case you only need to convert specific emails instead of the whole archive), convert EML and MSG files into other popular formats, such as RTF, RTF, TXT, TNEF and HTML, convert .MBOX files into .EML and then to .PST and a whole lot more!

EML to PST Converter solves several crucial problems of any person switching to Outlook from another application or even another platform. It will help you arrange the migration of your emails from Outlook Express, Vista Mail, Thunderbird, The Bat, Eudora, IncrediMail, Entourage and others. It will be just what you need to import EML to Outlook and assemble a new PST file after its predecessor was damaged and processed by a data recovery tool that generated hundreds of EML files clogging your hard drive. It will also appear invaluable to Windows 7 newcomers who have just recently found out that the newest OS does not come with Windows Mail they used in Vista, thus making it impossible to start working with their emails right after the upgrade (they will have to find a way to import EML to PST).

The interface of EML to PST Converter is based on a step-by-step wizard that allows you to perform the necessary actions in a predefined order. This approach guarantees that virtually nothing can go wrong due to an incorrectly selected option or another haphazard action. Another great thing about EML to PST Converter is that you don’t need to be a programmer or a data recovery expert to get from point A to point B in the email universe. 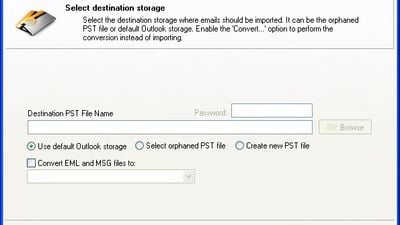 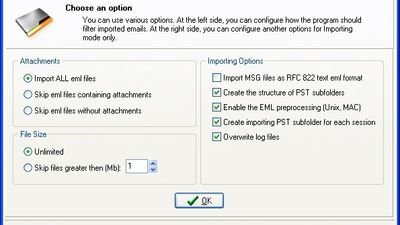 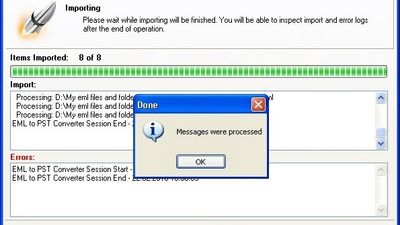 Our users have written 1 comments and reviews about EML to PST Converter, and it has gotten 4 likes

EML to PST Converter was added to AlternativeTo by Uhan on and this page was last updated .

Using the tool was a snap. I integrated my Vista based Windows Mail EML files into a PST file for importing into Outlook 2003. The process went fine.