EMANIM is a web app displaying interactive animations of electromagnetic waves and presenting phenomena such as polarization, superposition, interference, absorption, refraction, and optical activity (linear and circular dichroism and birefringence). It is available in English, German, French, Chinese, Japanese, and Hungarian.

In EMANIM, you can set up two waves (Wave 1 and Wave 2) with selectable polarization (horizontal, vertical, left circular or right circular) and you can show their superposition (Wave 1 + Wave 2). The waves as they move forward are shown between two planes; the electric field vectors are displayed at the planes. Using the controls, the amplitudes and wavelengths of the waves as well as their phase difference (the phase of Wave 2 relative to Wave 1) can be adjusted. The directon of Wave 1 can be reversed, to study waves traveling in opposite directions.

To study the interaction between light and matter, a piece of material can be inserted between the two planes. The length of this material as well as its extinction coefficients and indices of refraction for both waves can be adjusted using the controls. 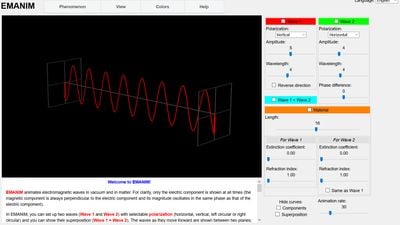 Our users have written 1 comments and reviews about EMANIM Online, and it has gotten 1 likes

EMANIM Online was added to AlternativeTo by sziami on and this page was last updated .