What is Dragons & Gridirons?

Dragons & Gridirons (D&G) is a new type of augmented fantasy football where you get to make tactical decisions that impact the outcome of the game in real time.

At its foundation, D&G uses the same rules as traditional, season-long fantasy football: you form a league, hold a draft, and then pick a lineup for each week for head-to-head matches with your league members.

Where D&G differs from old-school FF is the inclusions of a spell cards: powerful items that let you boost the performance of your players, reduce your opponent’s scores, or wreak havoc and hope for the best!

Each team gets a weekly allowance of magic points that determines how many spell cards can be played. The cards will vary in how many MP they cost to use, and it’s up to each player to decide the best use of their points. Some sample spell card effects:

Boosts: +25% to player yardage, double points for all WR’s on your team, triple TD points for one player, all targets count as receptions for PPR. Nerf: Target RB’s points reduced by half, remove all PPR points from a target receiver, eliminate any 1st quarter points from target player. Chaos: Randomly swap players between teams, eliminate a player from the game with a chance of backfiring, bonuses for playing under certain weather conditions, get a massive bonus for any player who gets ejected from the game! Team cards: cumulative boost for starting multiple players from the same team, block the use of nerf cards against your players

The effects typically occur in real-time, so another element of strategy comes into play deciding whether to use your spells right away, or to wait and see how the game is unfolding - while risking missing out on bonus points. Spell cards are acquired through accumulating experience points in-game, based on factors like league standing, player accomplishments, and starting the best team possible from your roster. No additional purchases are necessary. 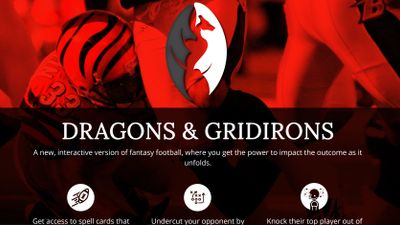 Our users have written 0 comments and reviews about Dragons & Gridirons, and it has gotten 1 likes

View all
Dragons & Gridirons was added to AlternativeTo by DragonsAndGridirons on and this page was last updated .