DJGPP (DJ's GNU Programming Platform) is a development suite for 386+ IBM PC compatibles which supports DOS-enabled operating systems. It is guided by DJ Delorie, who began the project in 1989. It is a port of the popular GCC compiler, as well as mostly GNU utilities such as bash, find, tar, ls, awk, sed, and ld to DPMI. Languages available include C, C++, Objective-C/C++, Ada, Fortran, and Pascal. The original Quake for DOS was compiled with DJGPP, as well as other programs such as GNU Emacs, p7zip, Vim, beye, UPX, NASM, THE, Linley's Dungeon Crawl, NetHack, Perl, Python, and auxiliary applications within Arachne. 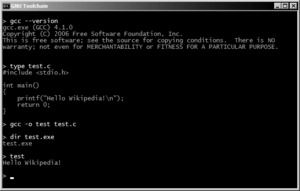 Our users have written 0 comments and reviews about DJGPP, and it has gotten 1 likes

View all
DJGPP was added to AlternativeTo by arjun on and this page was last updated .