Dexpot turns your monitor into up to 20. It creates and manages virtual desktops and enables you to work far more efficiently and comfortably with many simultaneously opened windows on Windows 95/98/ME and NT4/2000/XP/2003/Vista (incl. x64).
Show full description ▾

When I started this program with the default settings, I really didn't like it at all. After reading very positive comments here, I decided to give it another shot. I spent a good 30 minutes looking through all the settings, and now I LOVE it. The plugins are incredible too - it can even do compiz-like transitions! (Though they are too flashy for my tastes.)

I've tried VirtuaWin, WindowsPager, and a couple of others, but this one really does wow me.

Dexpot is one of my favorite apps of any type. I have been using it for several years and have never had a single issue with it. Its feature set is quite extensive. I've never experienced crashes of other instabilities. The worst I've encountered is that a small number of apps show up on all desktops and cannot be restricted to a single desktop. But these apps are few and far between, and I don't use them frequently, so I've never bothered looking for a solution. I just live with that quirk.

Can the 'warning' be removed? I believe it is obsolete for this app. I have installed dexpot on multiple machines (all using Win7 home or Win7 pro), they all had either Avast, Symantec, McAfee or Malwarebytes - none of which complained about dexpot or its installer. Perhaps other people are downloading dexpot from download sites that bundle their installers with adware? You can download dexpot directly from the developer's website.

As scanned by virustotal.com, this DexPot software is full of threats :-(

Maybe you got a bad download? Using for quite a while, update regularly, super paranoid aboit virus protection, yet never had a problem.

Maybe no longer dangerous. Recent virustotal scans of installer and portable download show 0 threats, and the website states that they removed some kind of advertising tool (OpenCandy) as of 2016-02-15.

Maybe no longer dangerous. Recent virustotal scans of installer and portable download show 0 threats, and the website states that they removed some kind of advertising tool (OpenCandy) as of 2016-02-15.

I've had 0 issues with viruses adware/etc, it doesn't behave too well with ObjectDock often, but other than that it works great even with multiple monitors and can be great if you need more than one 'workspace' of sorts. I've used it for over a year this time, and have used it in the past as well.

[Edited by Teleclast, April 14]
My only gripe really are issues with interactions with a few other applications I use (it works with most of them swimmingly), and the fact that dexpot has the possibility to take up a lot of hotkeys which unfortunately... windows also enjoys taking up.

Really helps productivity and offers a shit-ton of options. It's quite pretty too, for desktop customization freaks.

I don't recommend it for lower-end PCs (which I have). It uses quite a lot of resources at times. I had to disable it for now, until I upgrade my PC later on, but I'll surely be using this again.

If you have double monitors or more, I suggest avoiding virtual desktop switch softwares like this and using double monitor software like DisplayFusion.

Thanks for your thoughts! I've actually spent hours customizing desktops on Linux so 30-60 mins isn't bad. Plus, it's usually fun customizing stuff like this. 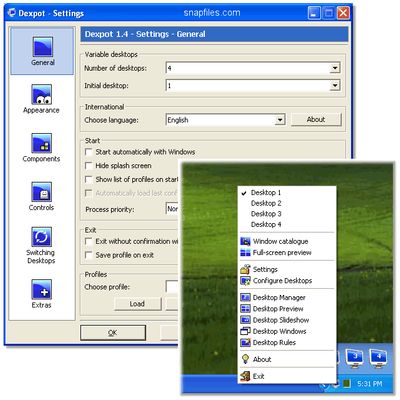 Our users have written 12 comments and reviews about Dexpot, and it has gotten 119 likes