What is Cue Player?

Cue Player is designed to be used by theater-sound people to play sound effects. With the availability of CDs with thousands of effects and the computer's ability to record sounds on its own, it's possible to have all the sounds for the show, including entry and exit background music, resident on a PC. Cue Player can organize those files, associate them with their cue lines, adjust volumes, and show running or remaining cue durations. Cues can be replayed or skipped over--difficult on a tape system.

There are four versions of the software:

In 2011 we introduced the companion program Cue Player Lighting that brings the same ease of control to lighting that Premium did to sound. 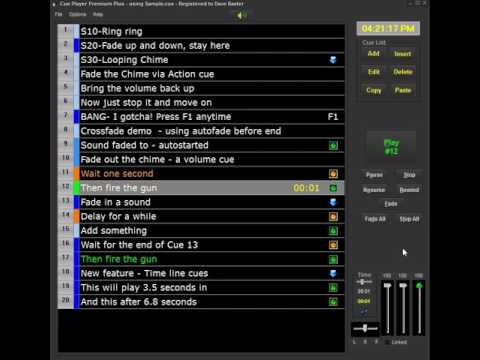 Our users have written 0 comments and reviews about Cue Player, and it has gotten 1 likes

View all
Cue Player was added to AlternativeTo by Danilo_Venom on and this page was last updated . Cue Player is sometimes referred to as CP, Cue Player Lighting.