ConnectedText is a powerful but simple information management system. It is based on wiki principles and is a free-form note-taking and note-management application that allows you to keep an unlimited number of notes in one or many files. The information can be accessed at an instant through sophisticated full-text searches, which can span all open files. Navigation between topics is a breeze. ConnectedText works like a notebook with an unlimited number of pages, which can be linked with one another easily by wiki-type links. It is also a free text database with hyper-linking ability. This provides you with a fast and easy way to store, structure and organize all your notes. It has a very capable outliner. ConnectedText's outlining view works like a one-pane outliner. But it can also be made to work two-pane outliner. Topics can be dragged into the outline view, for instance. It can also be used as a clipboard collection tool. When the clipboard catcher is turned on, anything copied to the Windows clipboard is automatically transferred to a ConnectedText topic. You can also drag and drop information from almost any source on the Web or your computer.
Show full description ▾

Last version is dated 2015 and the developer reportedly does not respond to inquires. See changelog: http://www.connectedtext.com/changelog.php

People who haven't used a personal or desktop wiki before (and I hadn't before CT) might wonder what such a software is good for. ConnectedText is sometimes described as a "free-form note-taking and note-management application." It's main strength and weakness is the freedom in the "free-form." It's a strength because it gives you a huge amount of freedom as to how you set up the software and what you use it for. It is incredibly versatile. But it also might be a weakness for novices, as initially it might not be that easy to grasp as to how to use it and what you can do with it.

At its heart it's a notes database. It's for keeping text-based notes, although just like with websites, you can insert images and link to local files as well as external ones. Moreover, and this is where the wiki-bit comes in, you can link the notes to each other as well, just like webpages. Effectively you can create your own personal wikipedia. How is this different from hierarchical notes databases such as UltraRecall, for instance? As you may have noticed with a huge amount of notes, once you have hundreds or thousands of them, the hierarchical tree quickly loses its utility as an organisational system. You will stop seeing the forest from the trees.

With a wiki like CT, instead of a hierarchical organisation, the notes are ordered in a flat, alphabetical list. The idea is that the links between individual items take over as the navigational and organisational mechanism. You can still view the implicit hierarchy when you need it with the built in Navigator, which shows you in mind-map style how the notes are linked from the home page down (or from any other chosen note). Also, you can create your own purpose-built hierarchies with the Outliner tool. There are also some powerful search tools and query commands which allow you to interrogate your database in different ways. The wiki eventually helps you discover new relationships within your data.

What is ConnectedText an alternative to? Due to its versatility, CT competes in a number of different categories. You can use it as notes database instead of UltraRecall or Evernote. You can use it as an outliner, such as Bonsai or UV Outliner, as it has it's own built-in single-pane outliner. However, thanks to the modularity of the various panes which you can dock or undock at will and move around and re-arrange, you can combine its Outliner with the other views to construct a dual-pane writing application, such as Scrivener or WhizFolders.

CT does have a learning curve associated with it, and it took me several tries to realise what an incredibly powerful and useful software it is. Although there is a bit of mark-up to memorise, the essential ones can be counted on one hand and are very similar to markdown code.

I have used a number of Wiki solutions over the years (Evernote, OneNote, TiddlyWiki, Wiki on a Stick, Mediawiki), but ConnectedText is the best one I have used so far.

The others were each good in there own way, but failed in one way or another that I couldn't get past.

ConnectedText is very easy to start using, the wiki-syntax is familiar, and it has a multitude of options and scripts to make things even easier.

I highly recommend that you download a trial and test it yourself.

Good, but not Great
This is one of the best applications of its kind, which use wiki notation. That being said, it's a flawed concept. Wiki notation, in which you have to use various plain text characters to implement formatting and linking, is not as easy to use as apps that are WYSIWYG (What you see is what you get). You have to switch back and forth between plain text and the rendered document. It is a relatively powerful and feature-rich app, but one that I don't see as practical to use. By default, there is no built-in organization for notes, but you can use categories and linking. The search features are really slow. I like the hyperlinking concept, but I prefer apps that are WYSIWYG and are easier to use.

Forum is not accessible unless you are a member ... logged in !
Forums can be a good guide to assess quality of support

This seems to be discontinued. The most recent version is from 2015.

Edit: bug fixes may be still done. Otherwise development seems to be ceased. 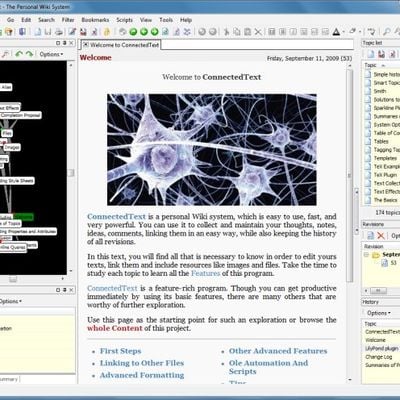 Our users have written 5 comments and reviews about ConnectedText, and it has gotten 20 likes

View all
ConnectedText was added to AlternativeTo by jariellp on Aug 12, 2009 and this page was last updated Jan 27, 2021.