What is Cloud Outliner?

This is a truly amazing service that stands out from the competitors by having an infinite amount of (sub)folders as well as text row indents in your notes. This lets you add an infinite amount of ideas while keeping them organized hierarchically. It has a few basic options in formatting (bold, italic, underlined and some colours), and some more nifty features like adding a note to a row.

Another strong sites of it is it's intuitive, discrete usability on both touch and keyboard/mouse that you have to experience to understand. For keyboard (both the Mac version and iOS version with bluetooth keyboard) you get keyboard shortcuts for pretty much all the functions in it, if you're a super user (like me :p). It syncs with iCloud, which is a very quickly and streamlined solution.

One feature I miss is ability to link a picture to your notes, but I guess it's part of the aesthetics not to include that. Unfortunately there isn't a Windows or Android (or Linux for that matter) version, it's all under the shadow of the great A. The iOS (cross-device) version is 3$, the Mac version 10$. I got them both, and for someone like me, who has too many thoughts in the head to not be organised, they're well worth the money. (It's funny how Mac applications are always so much more expensive that iOS applications (or apps if you want) that can do the exact same thing. I guess it's about marketing and what we've got used to expect of the price. Anyway, buy Cloud Outliner, at least for your favourite platform.) 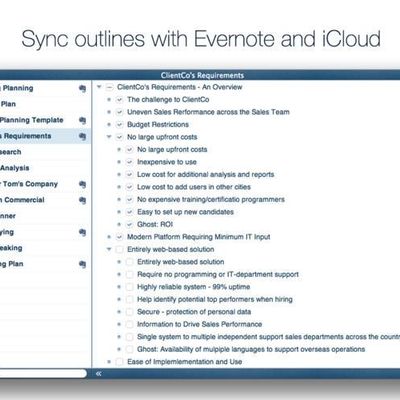 Our users have written 1 comments and reviews about Cloud Outliner, and it has gotten 4 likes

View all
Cloud Outliner was added to AlternativeTo by kscalvert on Feb 28, 2014 and this page was last updated Nov 27, 2014.