What is Cisco AnyConnect?

Cisco AnyConnect is a proprietary app that let's users connect to a VPN service.

Many universities use this as part of a service they pay for from Cisco. Therefore, public institutions unnecessarily rely on this closed-source app for their own students, teachers and researchers to connect to their own public university's network. This doesn't just amount to handing control to a private corporation, thereby privatizing public money. It also is a potential security and privacy vulnerability, since Cisco have been a long-term target of the NSA spying program. It also doesn't work well on Linux.

There is nothing wrong with supporting free and open source solutions like OpenVPN, which are used the world over. These don't put taxpayer's money into the hands of private company. If you're an administrator at a university and/or you have influence over the policies over how your school/university handles VPN connections, please urge higher-ups to reject Cisco. Support solutions instead for which we can check the code and which doesn't privatize public money. 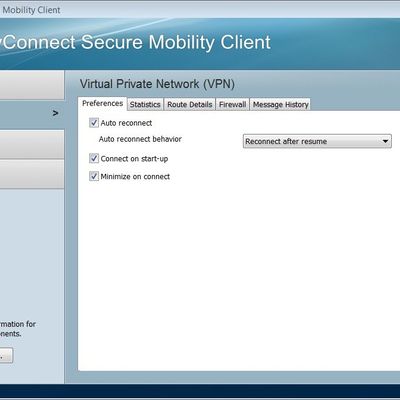 Our users have written 1 comments and reviews about Cisco AnyConnect, and it has gotten 14 likes

View all
Cisco AnyConnect was added to AlternativeTo by CaptainHindsight on Jun 1, 2011 and this page was last updated Jan 21, 2022. Cisco AnyConnect is sometimes referred to as AnyConnect.