Bins is an utility which allows you to group icons in your Windows Taskbar. 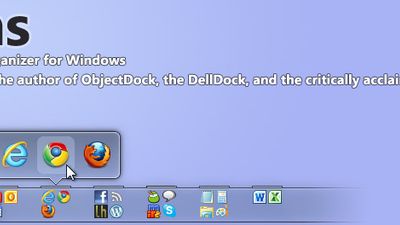 Our users have written 4 comments and reviews about Bins, and it has gotten 25 likes

Bins was added to AlternativeTo by Hunterinvitus on and this page was last updated .

As of July 18, 2017, 1UP Industries has released an update to Bins for Windows 10 Creator Update compatibility. Initial testing shows that it has indeed fixed the crashing problems with File Open/Save dialog boxes. The update is free for anyone who has purchased Bins in the past two years, or $4.99 for everyone else.

Sadly, this is true. Bins works still fine with Windows 7/8/8.1 and with any Windows 10 version up to 1511. There are some issues with 1607 (Anniversary Update) and with 1704 (Creators Update) it will totally mess with your system (shell32.dll errors resulting in different application crashes in various situations, i.e. using the File-> Open menus). This tool was great and imo very essential, there isn't a real alternative around, so it's really sad that this tool is basically dead.

Edit: Okay, now in August 2017, there actually was a new version released, however, without any information on the website or anywhere else, but at least - according to the message box which tells me I need to buy a new key, this version should work fine with the Creators Update of Windows 10. I get that 1upindustries is a one-man-company, I get that they closed their support forums because maintaining such a platform can be e bot of additional work and I even understand , that the dev never responded to my emails (besides a more or less useless auto-response). However: If you update your software, it is actual a must to at least announce that to your customers, especially if it is a update that important as 1.5 and please also release a changelog. I don't mind if you send an email or have a "news" section on your website or just post the date and the changelog (or a link to it) in under the download-button - but there is absolutely no excuse for don't having any indicator that a new version is available outside the internal updater itself. I found that new version completely by accident. I don't mind for buying this great tool again (I bought my version 2012 and it's only $5) but as a developer who want to sell your stuff you should led me know that there is actually something I can buy, because it is usable again.

I'm backing NewRaven's point, this tool has been causing crashes on the file explorer pickers on AU and CU, and it became even worse on CU.

UPDATE July 18, 2017: Disregard everything below; 1UP Industries just released an update to Bins for Windows 10 Creator Update compatibility. Initial testing shows that it has indeed fixed the crashing problems with File Open/Save dialog boxes. The update is free for anyone who has purchased Bins in the past two years, or $4.99 for everyone else. I fall into the "everyone else" category, and will gladly be paying the upgrade cost. Bins is that good.

I have the exact same problems with Bins on the Windows 10 Creators Update. If it is running while another program is launched, that other program will insta-crash when it calls what is presumably the native Windows File Open or File Save dialog box. This does not happen with programs that code their own dialogs (eg. GIMP). If I shut down Bins first and then launch a program, File Open/Save works fine. If I shut down Bins, launch a program, and start Bins again, File Open/Save crashes again.

Interestingly, in Chrome, I have a certain filetype set to automatically download/save to a certain location and launch, instead of asking where to save it. This operation has no problems completing when Bins is running, so it really is the File Open/Save dialog box itself that Bins causes to crash.

Developer Will not support Windows 11!

Very buggy. First, nothing on website indicating date of latest version, so who knows if it's updated for the latest Windows versions. As soon as I installed it, the taskbar became laggy and remained that way until I uninstalled, which was only after a few minutes both due to that and the fact it didn't even work right. It didn't show the small icons for all the grouped apps, just the big one for the app that the others were added to. When combining three apps, they seemed to work, but then when combining two others, it caused a second icon of the main one for that group to appear at the end of the taskbar, and I couldn't get the icon for the second app back. It also caused a gray box to be stuck permanently showing over one of them, like the preview you see when hovering over an app in the taskbar, but with no content, just solid gray. It even remained for a while after uninstalling. Just a complete mess. Too bad, because I would have gladly paid $5 to free up some space on the taskbar, had it just worked.