What is MIT App Inventor?

App Inventor for Android is an application originally provided by Google and now maintained by the MIT, Massachusetts Institute of Technology. It allows anyone, including people unfamiliar with computer programming, to create software applications for the Android operating system. It uses a graphical interface, very similar to Scratch and the StarLogo TNG user interface, that allowes users to drag-and-drop visual objects to create an application that can run on the Android system, which runs on many mobile devices.
Show full description ▾

limited option for arduino sensors, if youre working on a project with capacitive , or touch sensors don´t use this app.
Great alternatives of block coding are Pictoblox or Scratchforandroid

After spending days testing all the free ways to make a android app, the App Inventor so far is the ony one that I have
been able to do what I would like to, App Inventors UI builder is a really bad and the pasts they offer are really limited but
to get a simple app that requests data from a server this wins and it builds a native app that is ready for the market place
or standard install, I have made Hello app in the Native way on windwos, App Inventor and PhoneGap - Webapp/API just little like the webapp way of making iphone apps, Native and Gap builds failed to install on a device after build only worked when in dev mode, App Inventor was able to download and install on my device and was compatable with the older devices like my partners MID Android Pad powered by 1.6

Google App Inventor is limited but still the best for the new comer or people with problems where they can't just learn a new language like my self.

I build a app that was made in App Inventor I say this app is worth the slow updates better
do it right then rush it or use a app build that is really a webapp. 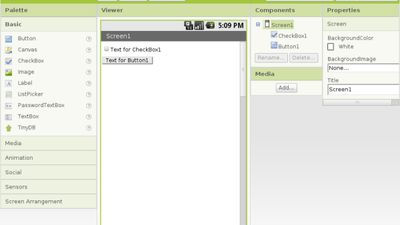 Our users have written 3 comments and reviews about MIT App Inventor, and it has gotten 40 likes