AnyDVD works in your computer's background to automatically remove the copy protection off a DVD movie, allowing you to rip the DVD onto your computer. You can also remove the RPC region code, thereby making the movie playable anywhere. AnyDVD also decrypts protected audio CDs, HD DVDs, and Blu-ray Discs (the latter two with AnyDVD HD).

Additionally, AnyDVD can remove unwanted movie features, including subtitles and prohibition messages such as copyright and FBI warnings.

Decryption is not all that AnyDVD offers. You can control the drive speed of your DVD drive, allowing you to reduce the noise level. You can even adjust the display frequency of your monitor.

AnyDVD HD works. Rarely is it almost sufficient to know that much about a software.

I own many relatively obscure commercial Blu-rays, but also sometimes want to watch rather new ones. Both of those properties can be a problem when trying to watch them on a PC the usual way, using a key database, because often the keys for those discs won't have been shared yet. I don't know how it does what it does, but simply having AnyDVD HD running in the background, so far I didn't encounter a single Blu-ray I couldn't watch, using the software I want (including MPC-HC and VLC).

It includes a friendly settings panel that lets you configure which of the customisations you'd like to have enabled. Apart from decryption of commercial DVDs and Blu-rays, it also supports removing regional restrictions, ignoring user restrictions (such as allowing you to turn off forced subtitles or skip titles marked as non-skippable), skipping logos and disclaimers, customising subtitles and more. It also offers certain features for HD DVDs and audio CDs.

But the main feature is, of course, that it lets you watch the darn movies you paid for. I can't believe that I even still have to say this in 2019. But the movie industry, for some reason, still think it somehow serves their purpose if they specifically and deliberately punish the few remaning people that are still stupid enough to pay for officially licensed copies of their products. I think even the octogenarian "computer-whatamajig?" executives of those companies could have understood by now that the only people not driven mad by all this DRM, regions, limitations and encryption nonsense, are those who decide to download the illegal, unlicensed copies instead. Which – let's just state the fact – exist for every single Blu-ray ever released, because none of these "copy protection" measures has ever worked, nor will it ever. The illegal copy, therefore, is both cleaner and of higher quality than the official one, while being free.

It takes a considerable amount of engineering, and most of all stupidity, to somehow manage to push the value of your product to be even lower than the free illegal copy of it, but somehow, the movie industry has managed just that. Nothing makes you want to spend $30 on a Blu-ray, containing files that are identical to the ones floating around P2P file sharing networks, more than knowing that you'll get the infinitely inferior version – not because of technical reasons, but because the licensor decided it should be that way. (And hey, even if the illegal copy wasn't so great – at least the people who downloaded it aren't out $30!)

Shame on me for still caring about recompensing the creators, I guess? At least that's the message I hear loud and clear from studios and distributors. Their answer, of course, is: use our legal streaming and download services instead. Of course. The places I get to pay (usually) the same amount of money for a copy with significantly reduced video and audio quality, while having to deal with even more DRM nonsense designed to make what I just paid for worthless (say hello to movies that you can't watch on the go, on your other computer, when your network is out, or simply five years down the line when the service shuts down).

Another reason I like AnyDVD? Their fair licensing. That should be self-evident for a company whose products are dedicated to protecting consumer rights, but it's still worth pointing out. You get a full-featured 21-day trial, tied to your machine. But if you decide to buy a license, it won't be tied to a specific computer, nor require online activation. It's true, old-school, buy-to-own software that comes with reasonable confidence that you'll be able to keep using it. You don't have to buy a second license just because your old computer died, or you also want to watch a movie on your laptop for once. But you might want to, just to support the developers and their cause.

So, when you want to watch your legally purchased movies on your computer, and it comes to the decision: do you want to support these anti-consumer practices, designed to &%#ç you over, by purchasing one of the "official" software players? Or would you rather give that money to a developer that is actually on your side, and wants to allow you to watch the discs you paid for without restrictions? The answer should be clear.

I needed a solution to play DVD's on my PC without needing to buy a clunky DVD player software like PowerDVD or some other trialware crap. This also offered the solution to skip the annoying trailers and adverts and jump straight to the main DVD title. I could pop in a movie and be watching the opening in seconds, in my favorite media player!

Now US corporate scumbags feel the misuse of this software was the creator's fault, and shut him down.

After looking around a bit, I've decided on the two best FREE alternatives to AnyDVD (which is apparently as expensive as Microsoft Office... geez). MakeMKV and DVD Fab both offer Blu-ray decrypting, and the features cost no money. Try those first.

After MakeMKV has left the beta stage, it became paid Shareware. It still decrypts DVDs for free forever, but the Blu-ray features require registration after 30 days. The fee is $60.

DVDFab's free version, Passkey Lite, says it only supports certain older methods of Blu-ray encryption. The list is on the website, but I didn't try it out personally so I don't know how big of a limitation it is in practice. The website certainly implies that you'll need to purchase a license for many newer discs. The price seems to be the same as for AnyDVD HD (€109).

The cost of upgrading to the HD version sends the cumulative cost to around $100, so the price of this software is really steep. However, it seems to be one of the few methods available for ripping Blu-ray discs, so if you really want to do that, this might be your only option.

Also, it's important to note that even once you rip a Blu-ray with this, it will still probably be unplayable on most media players. You'll have to use Ripbot264 or a similar software to transcode it. 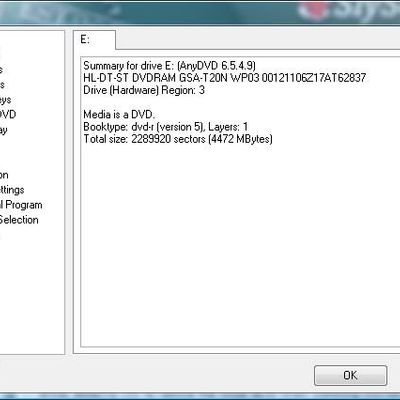 Our users have written 4 comments and reviews about AnyDVD, and it has gotten 64 likes