What is Amazon Simple Storage Service?

Amazon S3 is an online storage web service offered by Amazon Web Services. Amazon S3 provides storage through web services interfaces (REST, SOAP, and BitTorrent). Amazon launched S3, its first publicly available web service, in the United States in March 2006 and in Europe in November 2007.At its inception, Amazon charged end users US$0.15 per gigabyte-month, with additional charges for bandwidth used in sending and receiving data, and a per-request (get or put) charge. As of November 1, 2008, pricing moved to tiers where end users storing more than 50 terabytes receive discounted pricing. Amazon claims that S3 uses the same scalable storage infrastructure that Amazon.com uses to run its own global e-commerce network.Amazon S3 is reported to store more than a trillion objects as of June 2012. This is up from 102 billion objects as of March 2010, 64 billion objects in August 2009, 52 billion in March 2009, 29 billion in October 2008, 14 billion in January 2008, and 10 billion in October 2007. S3 uses include web hosting, image hosting, and storage for backup systems. S3 comes with a 99.9% monthly uptime guarantee which equates to approximately 43 minutes of downtime per month.DesignDetails of S3's design are not made public by Amazon. According to Amazon, S3's design aims to provide scalability, high availability, and low latency at commodity costs. 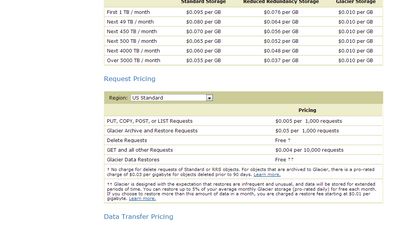 Our users have written 0 comments and reviews about Amazon Simple Storage Service, and it has gotten 17 likes

All The Things! •  Productivity - File tools