What is ABBYY FineReader PDF?

ABBYY FineReader PDF is an optical character recognition (OCR) software that provides unmatched text recognition accuracy and conversion capabilities, virtually eliminating retyping and reformatting of documents. Intuitive use and one-click automated tasks let you do more in fewer steps. Up to 190 languages are supported for text recognition — more than any other OCR software in this market.

I've tried a wide range of OCR packages over the years in different contexts but Abbyy FineReader Pro (currently version 12) remains my favourite. The critical features of OCR software are accuracy, speed/workflow and ease of use. One may add to that the ability to export the recognised data in variety of formats, with different amounts of information (e.g. text only, text with font and alignment information, full layout). For some people (such as myself), the ability to recognise other writing systems is also important.

On all those fronts, Abbyy FineReader is at least a contender for top position. The other possible is Nuance OmniPage which is also very good, but in my opinion FineReader beats it in a number of importrant areas:

I tried several ocr softwares for my company. The best one quality\price is finereader. For several users is better to use finereader corporate as it has automatic ocr recognition mode - http://www.abbyyindia.com/finereader/. Another think, i preffer the 11 version of it.

powerful and accurate, my workload is much faster because of it

after testing many versions it decided to keep version 9 while is a bit slower that recent versions it has a much better compression taking same img file 8mb inversion 9 give a a 600 kb file while using the last version give me a 2.3 mb, maybe people dont longer care about file size or something or mixed raster content is not a priority anymore

ABBYY is the best program I've ever used with OCR technology. It's very easy to use although it requires a good RAM memory.

This is best app for character reading. 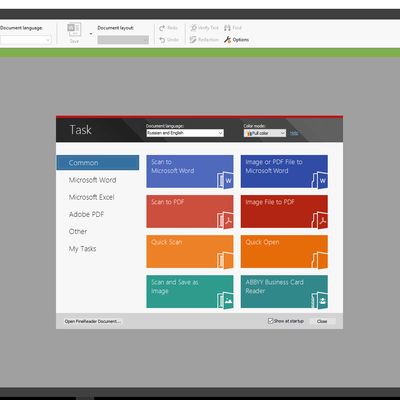 Our users have written 9 comments and reviews about ABBYY FineReader PDF, and it has gotten 127 likes