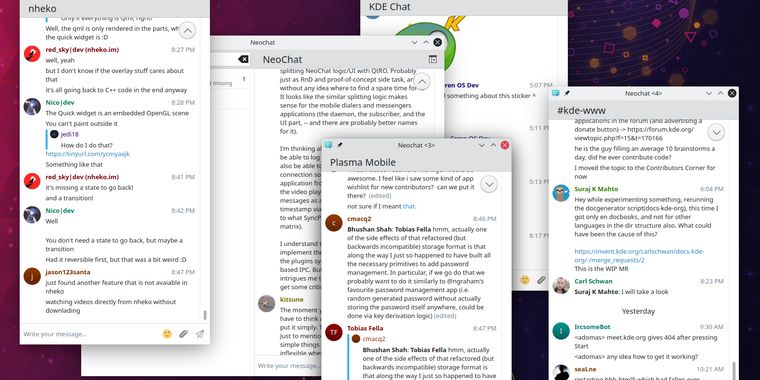 NeoChat, KDE's native Matrix chat client, is out. It comes with a new login page that detects the server configuration from your ID, stickers, message editing, and much more.

In a blog post from one of the client's developers, the new features implemented in the 1.1 release are described in detail. These new features include:

• A completely new login page that supports single sign on and Matrix ID-based server configuration detection. It also supports loading terms of service pages for servers that require agreeing to their set of terms before being able to connect. Before this, NeoChat silently failed to connect to those servers.
• "Multimodal mode" that allows you to have multiple rooms open in multiple windows.
• Support for viewing message stickers, though support for sending them isn't available "yet"

In addition to the redone login screen and multi-window support, feature implementations include the following:
• Support for editing messages based on how the editing feature in functions.
• Various commands, including /shrug, /lenny, /rainbowme, /join, /invite, /part, /ignore, and /unignore
• Further integration with

KDE Plasma that allows, for example, the number of unread messages to appear in the Plasma Taskbar.

Neochat is a client for Matrix, the decentralized communication protocol for instant messaging. It is a fork of Spectral, using KDE frameworks, most notably Kirigami, KConfig and KI18n.