What is Zombs Royale?

From the creators of Spinz.io and Zombs.io comes one of the most fun and adrenaline filled battle royale games. Join the millions of players who have played ZombsRoyale.io and choose from the many available game modes to play, including an ever changing rotation of limited-time game modes. Do you have the skills and strategy it takes to be the last player standing in this action packed PvP battle royale game?

Game Modes: Solo: Play by yourself against 99 other solo players in a fight to become the last one standing Duo: Play with a friend, or auto match with a new teammate! Squad: Assemble a squad of 4 players to prove you're the best team alive, or get auto matched if you don't have 4

Limited-Time Game Modes: Zombies: Team up as a squad to take on other squads while having to deal with hordes of zombies! 50v50: 4 player teams not enough? Battle a team of 50 while being put on a team of 50 yourself! Superpower: Defeat other players and collect power-ups; move faster, shoot further, and more! Weapons Race: Small map, no loots, defeat opponents to level up your weapon, be the first to eliminate opponents with the last weapon to win!

Features: Cosmetics - Customize over 1000 unique character cosmetics unlocked via in-game coins, however, some in-game items (non-balance changing) will be available for purchase! Leaderboards - Climb to the top of the leaderboards to show that you're the best. See how you stack up against other players in eliminations per match or time survived! Seasons - Every season will last a few weeks and grant exclusive cosmetics unique to each season depending on your performance! Complete challenges and you'll be able to gain rewards at a much quicker pace! Rewards - Daily and weekly rewards are available, you will receive special coins or cosmetics for your character! Friends/Clans - Friends and clans (soon) will be available! Meet and hang out with your friends and squad up in-game! 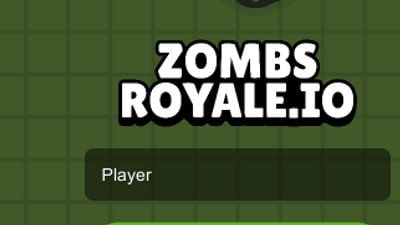 Our users have written 3 comments and reviews about Zombs Royale, and it has gotten 3 likes

Zombs Royale was added to AlternativeTo by zombsroyaleio on and this page was last updated .

Zombs royale.io Is the best game I've ever found in my life!