YubNub is a networking web service with a command line–style interface. It allows users to create and use commands which are mapped to webpages and web services.FeaturesCommands can be created for most websites and services. (Technically, any web service that can be accessed via an HTTP GET request is supported. HTTP POST support requires a proxy server.) Commands can be chained using a syntax similar to pipes. YubNub has a simple, e-mail-based moderation system. Commands can be reported as spam or nominated for a list of "Golden Eggs" (commands that people think are the most interesting/useful). Currently, all such reports are investigated by the author.Tools and instructions have been written to integrate YubNub with various browsers and operating systems. YubNub commands are constantly being added. There is a tutorial describing most of the advanced features. CommandsA YubNub command is typically a one to ten (10) letter abbreviation or word that corresponds to a web service via a HTTP GET request.YubNub commands can be set via the create command. Anybody can create these commands and use them without the need of creating an account. All commands can be seen and searched using the ls command. Notable or unique commands are nominated for "Golden Eggs", which can all be seen via the ge command. YubNub commands can be used as follows:

⚫︎ Command line interfaceYubNub either have CLI support or is a CLI-only app.
This app doesn't have any features at the moment. 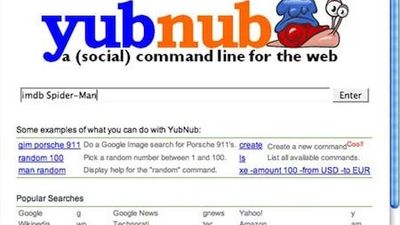 Our users have written 0 comments and reviews about YubNub, and it has gotten 6 likes

View all
YubNub was added to AlternativeTo by 914ian914 on and this page was last updated .