What is Y PPA Manager?

Y PPA Manager is a GUI tool to add, remove, purge, list and search for Launchpad PPAs. It works with Ubuntu and Linux Mint.

Y PPA Manager was last updated in 2013 and no longer works.

This is an excellent, and almost necessary, addition for Ubuntu and its derivatives. Y PPA Manager opens up a door to a wider range of software that is not available in the standard repositories. While this software is available either way, Y PPA Manager makes it much easier to access with a user interface to search all personal package archives registered on Launchpad and does all the work of adding any PPAs and public keys to your system. Simply search for a package you want, and add its PPA. Once the PPA is added to your system, update the cache and install any packages with your standard package manager.

Even Debian & Debian-derived system should be able to take advantage of it. The user only need enter the desired Ubuntu version manually. 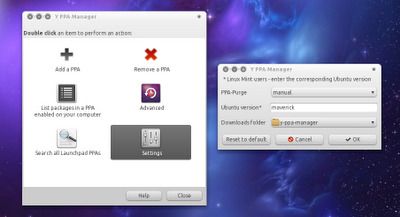 Our users have written 1 comments and reviews about Y PPA Manager, and it has gotten 16 likes