Wasteland was originally developed by Interplay, and spawned the creation of the Fallout series. The game was published by Electronic Arts. inXile Entertainment, is planning on remastering the original version that was created by Interplay. Which will be sold with their 30th Anniversary Bundle.

Wasteland's game mechanics are based on those used in the tabletop role-playing games, such as Tunnels and Trolls and Mercenaries, Spies and Private Eyes created by Wasteland designers Ken St. Andre and Michael Stackpole. Characters in Wasteland have various statistics (strength, intelligence, luck, speed, agility, dexterity, and charisma) that allow the characters to use different skills and weapons. Experience is gained through battle and skill usage. The game generally lets players advance using a variety of tactics: to get through a locked gate, the characters could use their picklock skill, their climb skill, or their strength attribute; or they could force the gate with a crowbar or a LAW rocket.

Wasteland 2 was developed after Brian Fargo obtained the rights from the Konami, which obtained the rights from the original publisher of the game Electronic Arts. After which, Fargo, developed the game with his, company inXile, through crowdfunding in 2012.The game was released in 2014 for Linux, Mac and Windows, and was later ported over to the PlayStation 4 and Xbox One. inXile, earned a total of 12$ million in revenue from the game. The game has been confirmed to be coming to the Nintendo Switch.

Wasteland 3, is said to have improved graphics, but a shorter game play time of 50 hours, compared to the second installment, which had over 100 hours, and will be based in Colorado. It will also include multiplayer, with two players, as well as an updated combat system similar to XCOM: Enemy Unknown. The game is scheduled to launch on Linux, macOS, PlayStation 4, Windows and Xbox One in 2019. 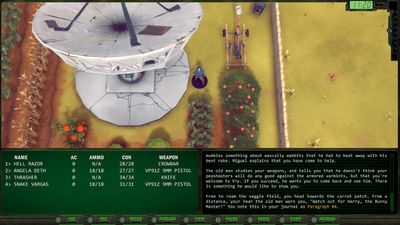 Our users have written 0 comments and reviews about Wasteland, and it has gotten 6 likes