Vitamin-R is a different kind of productivity tool. It helps you getting started, supports you in your task, keeps you focused and motivated.

Vitamin-R creates the optimal conditions for your brain to work at its best by structuring your work into short bursts of distraction-free, highly focused activity alternating with opportunities for renewal, reflection and intuition.

The built-in task logging and statistics features create a positive momentum towards productivity by providing visible feedback on your progress and achievements.

Vitamin-R plugs into your life rather than trying to take it over. You can use it occasionally to overcome procrastination or mental blocks or you can re-organize your entire working life around the concepts that it embodies. It complements rather than replaces traditional to-do list managers, such as Things, OmniFocus or The Hit List for which direct integrations exist.
Show full description ▾

I started using Vitamin-R fairly early in the 1.X development cycle. The developer has very regularly pumped out improvements since then, it's currently at version 1.77. I want to praise this application for several reasons.

First, I think its very reasonably priced for how valuable it is to me. I get easily distracted, and switch between various task managers like Things, Omnifocus, and even The Hit List, which I got in beta through Macheist several years ago. While those are effectively containers and manipulators of task information, Vitamin-R makes one individual task take the forefront of my concentration. It basically allows you to enter tasks manually, or drag tasks from the aforementioned task managers, to make them active. While the task is 'active,' you decide how much time you want to allot to the immediate task, and it keeps a timer going in the task bar. You have the option to have a periodic message at various points during and at the end of the allotted time. You can also have sounds play during, at various points, and at the beginning and end. I have found that having a ticking clock noise going whilst working on an individual task is remarkably effective. Never would've guessed this on my own, but it was a built in option, so I tried it.

Which brings me to my second point of praise. The developer is constantly coming up with ideas for improvement, and tweaks to make usability better. I think, generally speaking, these tweaks and additions do not add a burden to the user, but only give additional functionality to those who want it. I'm amazed by this guy, because he comes up with stuff like integration with the neurosky mindwave, which is a USB consumer-level eeg unit to read brainwave activity like concentration. What kind of developer thinks of stuff like that?! It's awesome. I am a forever fan of his because I had some qualms about how the consistency of keyboard shortcut functions, and wrote a fairly lengthy post in the forums. The dev and his crew immediately and continuously dialogued with me, and accepted my suggestions. I think they are this way with most user feedback. And it's not like this is a huge money maker. I'm genuinely moved by this sort of customer interaction, so he has a cheerleader in me from hereon out.

My last point is how surprised I am at the true usefulness of the app. It seems to occupy an oddly empty niche of task and project management. I really only mentioned the most basic level of use - manual or drag and drop task focus. But as far as I'm aware, the application is peerless in the task management area. Whereas Omnifocus, Things, and The Hit List have some overlap, they are kind of like adjectives and nouns of tasks, and Vitamin-R is like the verb. Those other tools allow you to describe the nature of the work you need to do in great detail, but I hadn't noticed that they don't really help you in actually doing the work. It might be the case that most people are more disciplined than I am, but until I tried Vitamin-R, I wasn't aware that I would've needed a specific application for this purpose - to make me focus on doing one thing. I also am a fan of the program Concentrate, another mac app (made by rocket) with a more overarching intent of creating the environment for effective work, but unlike Vitmain-R, that app hasn't seen anywhere near as many updates as Vitamin-R. The key here, though, is that the developer of Vitamin-R continues to do what he so effectively did at the start, identify a need that I was completely unaware I had. Definitely worth the money. 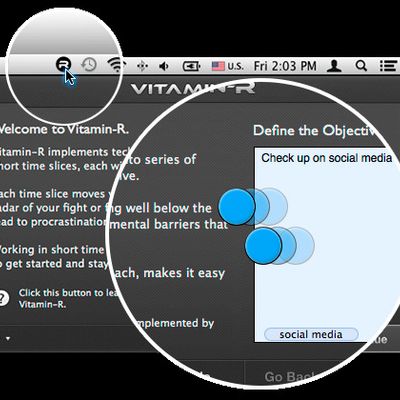 Our users have written 1 comments and reviews about Vitamin-R, and it has gotten 12 likes