Trillian is an instant messaging app that works on phones, tablets, and desktops while keeping your chats neatly synchronized between all of them! We think conversation should be easily shared between all of your devices, not trapped as text messages on your phone. Here's how we do it: • INSTANT MESSAGING: Your unique Trillian username can be used to send unlimited messages free of charge. Trillian uses your existing data plan and/or WiFi. • ANYWHERE: Trillian's continuous client feature delivers your chats instantly between all of your connected devices. In addition, Trillian automatically silences push notifications on mobile devices if you're active on a desktop - no more dealing with a phone buzzing on your desk all day! • SIMPLE: Trillian places a strong emphasis on fast and reliable message delivery and a beautiful, easy-to-use interface. • SECURE: All communication with Trillian servers uses TLS to ensure third-parties can't read your chats. • INTEROPERABLE: Of course, Trillian wouldn't be Trillian without support for Facebook Chat, MSN, Google Talk, AIM, ICQ, Yahoo!, and Jabber.

Trillian... now for businesses, too! With Trillian for Business, your entire company stays connected in real time. Discuss group projects in persistent group chats, hold private 1:1 conversations, and send images and files with ease. Combined with the power of centralized chat history, you'll soon wonder how you survived without Trillian. 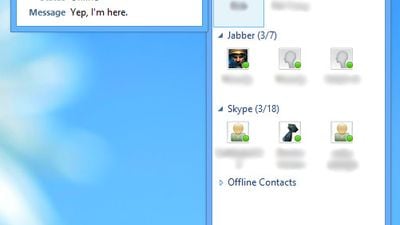 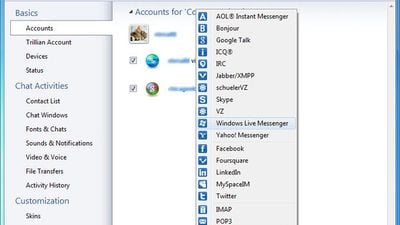 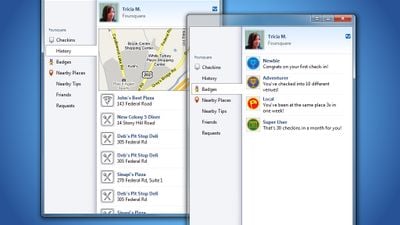 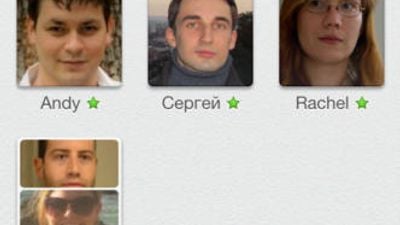 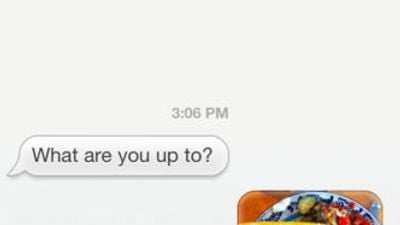 Our users have written 13 comments and reviews about Trillian, and it has gotten 278 likes

Trillian was added to AlternativeTo by Aerialsky on and this page was last updated . Trillian is sometimes referred to as Trillian Astra.

I wanted to have some alternative for Skype with support for other services like gmail checker. You don't need Skype client to be installed to use this Trillian. It takes less RAM than Skype and plus is you can set up other social networks for example Facebook, Twitter etc.

You can pay for it but without paying you can have everything you need, but with some ads. User interface is changeable with skins and there are emotions packages for Skype etc.

I would recommend it, it's lightweight it can check your mails and many other things.

The ads are intrusive and annoying. However, the app itself is decent and very versatile, supporting a wide range of services. It is fairly stable and I've used it happily for over a year now. I don't pay for the premium version and haven't missed any features I'd want. The UI is also good, minimalist and well designed, and I prefer that to Pidgin. Each to their own of course!

The intellectually weak and emotionally abusive haunt the "support" forums. I am not alone in this experience. The Cerulean people have irritated some technology people to the extent of a PR backlash.

Better functionality for multiprotocol employment via

Jitsi (SIP & XMPP, and the others)

Trillian was the go-to software for multi-client IM on Windows, but in recent years the company has lost its way and dropped many protocols, while other multi-client programs have continued to add new networks, and continue to support those that have officially ended (eg. MSN). Since they deleted their old forums and the useless alternative they had, there is no level of community or open feedback. Cerulean are the least social, social media connector.

Don't get me wrong, I still use Trillian, but mostly because I still have a working skype connection and the other lost networks are not much used anyway.

Positive stuff: It is small compared with most other IM software (v5 = 15 MB download), and is not bloated (not sure why some complain it is) It is very simple to setup, especially if using an existing Astra account because it remembers which networks you connect to and already has your user details. IRC (desktop version) is made very easy to use and rooms to manage, even though it lacks the power features of a dedicated IRC client. just being able to combine Facebook and Google chat into one smaller faster app is enough to be worth using. Being able to combine contacts multiple IDs into one meta-contact is exceptionally useful (and tidy) The integrated screen capture and media clip recording is very useful and easy to use. It supports many network native features so there is consistency at both ends. Many high quality and genuinely useful skins, plugins, emoticons + Emoji and sound packs have been made, so more network native compatibility is achievable (mostly). On the desktop it makes Twitter much easier to digest and quicker to respond to. The Astra IMPP network is Open source so people can inspect the code and make plugins for other IM software. v6 has a brand new plugin system that allows more features. Over all It is very polished looking and easy to use, and the advertising in the free version is not obtrusive or often shown (mobile version shows more often, and is in a position that makes fake GUI malvertising a risk). Other free advert driven apps tend to show adverts to the people you are talking to, Trillian does not. Using IMAP email accounts with the desktop client is a really handy way to keep updated and delete unwanted emails.

Negative stuff Enabling diagnostic logging allows Cerulean to see your conversations in plain text. Only temporarily enable if you need it. It has Emojis (I hate them). Most other multi-client software supports more common/standard networks and actively adds more. Cerulean have not added a network for many years. Nobody has made an Astra IMPP plugin for another IM client, so it is as useful as any other proprietary network. Cerulean deleted the developer site where all the addons were hosted, so finding addons is difficult. Over many years possibly the single most requested plugin or security feature was OTR/PGP encryption, and the reply remains the same "it is in our to-do list". It is not likely they ever will add OTR before Cerulean are gone or sold. Community help is gone and they rely on an FAQ section, fuelled by feedback via email. All the old 3rd party developers have no where to gather, create or release addons for the new version 6, so the future of Trillian looks very basic. Lacks many features of the networks it supports.

To sum-up I would say, on the desktop use it if you only need the few networks it supports, but definitely use it on a low spec mobile device, because the odds are you use FB and Google chat already, and it saves on a lot of RAM. For some reason mobile devices don't have any other comparable app that is still developed, so if you want to integrate multiple accounts and contact lists into 1 handy app, you have no real choice.

I see people making a lot of XMPP suggestions, but even though many IM networks will be accessible they all require XMPP, which is perfectly fine if all you want is jabber, Google and FB chat. On Windows I would recommend a beginner try Pidgin even though it is not as easy to setup as Trillian, and recommend a nerd use Miranda-NG (still supports Yahoo and MSN) . These have the widest IM and social media protocol support, and developer networks. On MacOS again there is not much to choose from, but hopefully the new security update for Adium (available as a beta) will spur them to port more of the recent Libpurple plugins.

Trillian may have a future as a mobile only app, but not if they don't add commonly used and needed networks. Only old farts, and people from Eurasia use ICQ, and only the misguided few remain using AOL for an ISP. Trillian will fill a need for now, but do not invest your time in it for the future.

about this piece of &#>@! : https://en.wikipedia.org/wiki/Trillian_(software)

SecureIM is an encryption system built into the Trillian Instant Messenger Client.

Are they asking money for it??? It must be shown in schools or to the world: "How to recognize a fake-secure software" !!!

Simple, use it without SecureIM so you have no ancient encryption on AIM and ICQ. Then it is just like the real thing. Actually no Trillian is free, paying is optional. Their claim of security and privacy only covers the parts they control, such as their database and the IMPP Astra protocol

"Cerulean will also be free to use any ideas, concepts, know-how or techniques contained in the Information (other than personally identifiable information) for any purpose whatsoever including, without limitation, developing, manufacturing and marketing products and services incorporating such Information. You agree and understand that you are responsible for maintaining the confidentiality of passwords associated with any account you use to access the Trillian™ Services."

So if you chat about anything they find useful they could just use it, this to me means there is no privacy whatsoever with Trillian. It is unfortunate because it looks quite alright to use for business but there is no way I will take that chance and I will actually make sure that everyone in our business knows about it. Based on this alone they have just got into my Blackbook of companies to avoid!

You cut the section out of context. This relates to; "...the following types of information and data, in an aggregate (not user level) form: usage statistics, crash reports, help requests, patterns, data and suggestions based on user actions." They are not scanning peoples messages, they take ideas from bug reports, user patterns and user suggestions. They are saying that once you suggest something good and they add it, that you have no claim of rights to it.

Forum regulars are wicked to Western Civilization while forum policies are absurdly evil.